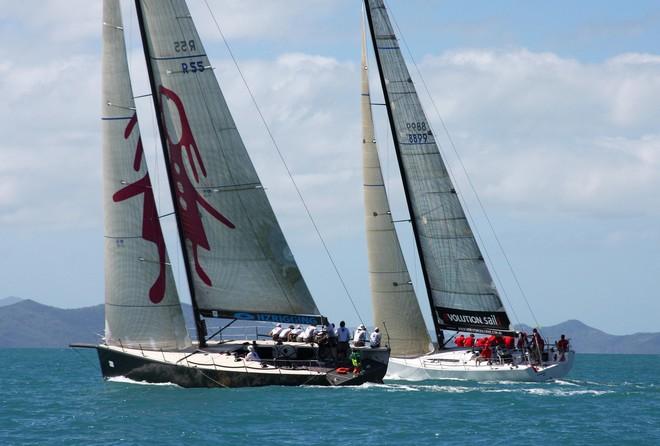 Hiatt sailed his Farr 55 to a final race victory on Pioneer Bay, by just 40 seconds on handicap, from Ray Roberts Evolution Racing.

The two boats were locked together on points; each with three wins, two seconds and a third place. The overall title win went to Hiatt on a count back as the last race winner. Robert Date's Reichel Pugh 52 Scarlet Runner was third.

This was Hiatt's sixth attempt to win at Airlie Beach, he previously sailed a Beneteau First 47.7 Elektra for two years and then the Cookson 50 Living Doll for three years.

Last year Hiatt and his Living Doll crew featured in another very tight series. He was leading the series into the very last race when he was forced inside the Grimston mark by Ray Roberts on Quantum Racing and Roberts went on to win.

Today, as Hiatt approached the Grimston mark he was sure that he had already lost the race, his Living Doll was behind the smaller boat (Evolution Racing) which had an impressive handicap lead at that point.

As Hiatt explained: “On the run to Grimston we went offshore, we thought we did better with the wind shifts, but when Evolution Racing came off the shore she had picked up boat lengths and rounded ahead of us.

“It took us another half a leg to get through her and then we put our heads down. We sailed our own race and just concentrated on boat speed,” he said.

Roberts said: “It was another exciting race in an already exciting series. We had our time on Living Doll at the last mark, but the breeze was fading and she sailed away from us.

“Michael deserves this win, he and his crew sailed very well, it was a great series and now we move on to Hamilton Island Race Week where we will continue our battle with these and other boats,” he said.

It was Race 7 for the Performance Racing division and Peter Mosley's Sydney 36 Local Hero was the winner on handicap from George Challoner's Airlie Retreat, with Mike Roper's Ropabull third. Line honours winner Rock n Roll, Kim Williams Melges 32, flew around the course finishing over eight minutes ahead of Local Hero with Charles Wallis Reignition just six seconds behind her.

The Performance Racing Championship was won by the Elan 37 Airlie Retreat (RMYC). One point behind the winner was True Love, Roger Downs Farr 1106 from the Whitsunday Sailing Club. Roper's Beneteau 42 Ropabull (RMYC/BB) was third. Just a point separated each of the top three boats, indicating the intensity of racing over this seven-race series.

“Steathy, like a good bottle of wine, gets better with age,” says Lake Macquarie sportsboat veteran Bob Cowan. “We had five line honours wins, a really big result for us, definitely the fastest Stealth 8 around. Really happy with the way the boys sailed. It's been a great series and the weather has been sensational.”

Cameron Rae said: “We drove 2500km from Royal Geelong Yacht Club for this series, so the win makes it very worthwhile. We came second here last year, but this is the first time for a while we've remained really consistent for a whole regatta.

“She is 10 years-old…(and) doing pretty well for an older skinny boat, not nearly as high-tech as the newer wider boats. We did well on the beats and found a good right-hand shift on the first downwind and that allowed us to gap the T7 (Guilty Pleasures) and the Melges 24.

“We are happiest on windward leewards course; on the island passage races we have not had the experience with tides. But it's a fantastic area to sail and we enjoyed the opportunity to see the Islands and we can't complain about the results,” said Rae.

Townsville Leon Thomas' T7 Guilty Pleasures led deep into the regatta, however, he admitted: “We started with a bang but faded. But we had a great time. The ASBA has done an excellent job, organising a very fair handicap system. The guys who won the regatta sailed very well.”

Shane Smith and his crew on the modified Blazer 23 Musto emphasised their dominance today in the Inshore Sports Boat fleet.

Having won the regatta with a race to spare, he went out and won again in Race 12 today on handicap from Airlie Sails, the SB3 of Whitsunday sailor Jamie Jochheim's. Marinetech Electronics, Lachlan McLean's Dart SB3 was third.

As he loaded his Blazer onto its trailer, Smith said: “We came up here to sail, so that is what we did again today.”

Race 6 of the Cruising Non Spinnaker series was won on handicap by Valdolese, the Beneteau 461 of Greg Sier. Brian Pattinson's Beneteau 44.7 Seaduction finished in second place, with Norm House's Richards 37 Avalon in third. Line honours in the race went to Seaduction, from Joie De Vie (Wayne Banks Smith) and Manly Too (Peter McAdam).

Sunrise, the Elan 37 of Helen and Jeff Shipsey won Race 6 of the Cruising Division 2 series on handicap, from Terry Archer's Bavaria 42 Cruiser Africa, with Graeme Douglas' Peterson Santana 30 Sunflower third.
On elapsed time Sunrise was the fastest, with Africa finishing some 3½ minutes behind her. Roger Nichols Lidgard 34 Seduction was third.

Local Whitsunday boat Africa — her full name Archer explains is an acronym for Another Flaming Regatta I Cannot Afford — is the Cruising Division 2 winner. Sunrise finished second with Seduction third.

For full detail results race by race and class by class, visit www.airliebeachraceweek.com.au