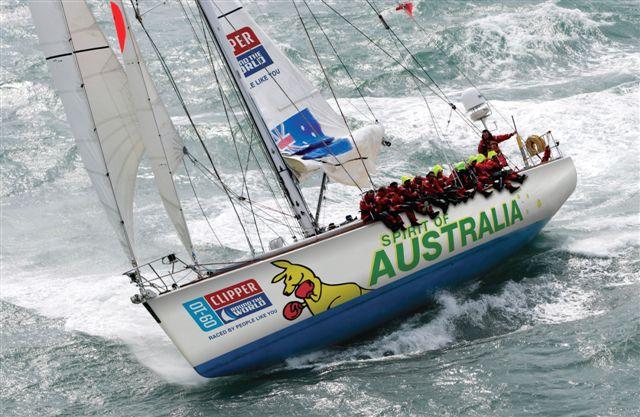 Australia has been confirmed as an entry in the Clipper 09-10 Round the World Yacht Race, making it the third consecutive time the sporting nation has fielded an entry in the biennial event.

The yacht, named Spirit of Australia

, complete with the iconic image of the boxing kangaroo emblazoned on her hull, will compete against nine identical, stripped down 68-foot racing yachts in the 35,000nm race around the world.

Spirit of Australia’s nine competitors are each sponsored by an international city, region or country, including Uniquely Singapore, Qingdao and Hull & Humber, all of whom will be making return appearances, having recognised that the Clipper Race provides a unique platform for delivering global market exposure.

Joining the race for the first time will be California, whose participation has been endorsed by Governor Arnold Schwarzenegger following the Clipper fleet’s inaugural visit to the state in the last edition of the biennial race. Cape Breton Island and Cork are also making their debuts and are joined by Edinburgh Inspiring Capital whose recent announcement was endorsed by a visit from His Royal Highness The Duke of Edinburgh.

The Clipper Race was founded by sailing legend Sir Robin Knox-Johnston, the first man to sail single-handed and non-stop around the world in 1969. He wanted others to be able to follow in his footsteps regardless of previous sailing ability; more than 40 per cent of those taking part in the Clipper Race have never sailed before embarking on their pre-race training.

Sir Robin says, “I’m delighted to see that we have more Australians in this race than ever before, all keen to represent their home nation on an international stage.

“Their enthusiasm for the event has also led to our decision to extend our race route for Clipper 11-12 with an Australasian leg, incorporating Southern Ocean racing around Cape Leeuwin (Western Australia) and port visits on both sides of the country,” he said.

The crew for Clipper 09-10 come from all walks of life, representing more than 230 professions and 33 nationalities, including 39 Australians. Despite their diverse backgrounds, they are all united by the desire to put their normal lives on hold and take on nature in the raw. One Australian delighted by the prospect of representing his nation around the world is 36-year-old Michael Hanssen.

Each of the teams is led by a professional skipper and taking charge of Spirit of Australia is Brendan Hall from Brisbane.

"I'm really proud of my Australian roots and I'm looking forward to racing hard under the banner of my homeland,” said the 27-year-old skipper, who previously worked in IT before making sailing his full time career.

“We have a large number of Australians on the crew, so the name Spirit of Australia is one we're all very excited about. I can't wait to sail the boat into Fremantle harbour and show her off to the home crowd," Hall said.

The Clipper Round the World Yacht Race first visited Australia in December 2005 when Clipper saw Australia’s debut entry in the race, westernaustralia.com, bring home the Clipper Race Trophy and the title of Clipper 05-06 Race champions.

The City of Fremantle’s Fremantle Sailing Club and Fishing Boat Harbour will once again host the fleet when the race returns this December. Fremantle Mayor, Peter Tagliaferri said visiting crews would not be disappointed.

“Fremantle proved to be a popular stopover for the crews during the America’s Cup back in 1987,” says Peter Tagliaferri. “The City hosting the Clipper 09-10 Round the World Yacht Race will once again show the international crowd our love affair with all things ocean-based.”

America’s Cup sailing legend and event director Perth 2011 ISAF World Championships, John Longley, says, “Personally, 23 years on from our successful America’s Cup campaign on Australia II, it is great to see the boxing kangaroo icon back on the water again and representing Australia in a global arena. I hope it brings them the same luck as it brought to us and Australia regains its title as Clipper Race champions.”

Kerry Sanderson, Agent General of the Government of Western Australia’s European Office, said: “I’m delighted to hear that Australia will be fielding an entry in Clipper 09-10 and that the fleet will be returning to Fremantle over Christmas and the New Year.

“The race restart from Fremantle Port has become a highlight of the local calendar and I’m sure the community will be out in force to support the crew of Spirit of Australia,” he said.

Berths for the Clipper 09-10 Round the World Yacht Race have sold out, but anyone who would like to sign up for Clipper 11-12 can now register to receive an application form.