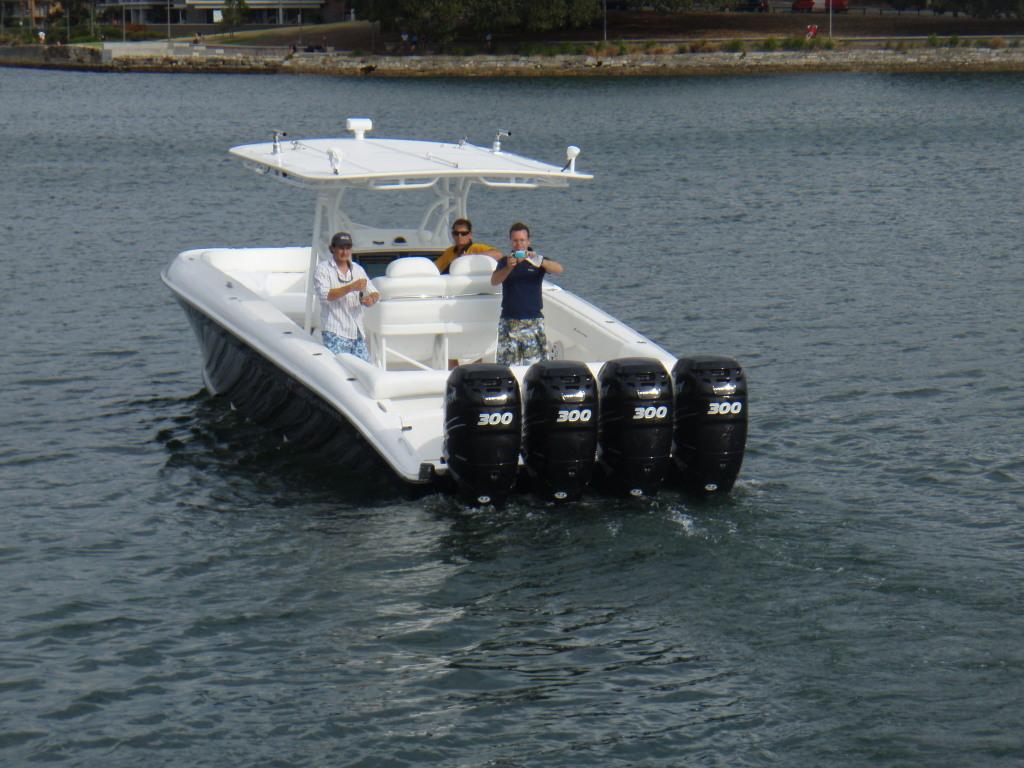 High-speed interceptor vessels from Florida boatbuilder Midnight Express are said to be the first choice for several governments and their agencies that patrol the waters of the Western Pacific, Gulf of Mexico and Caribbean Sea, and these adrenaline-packed boats are now available in Australia.

Newly formed distributorship, Midnight Boats of Woolloomooloo, has struck a deal with the family-owned US boat manufacturer to sell the boats in the South Pacific region.

Justin Clarke from Midnight Boats said a fully customised 37ft Midnight Express Open Sports demonstrator Midnight Rose is available for inspection and testing in Sydney, and boasts a four-outboard rig configuration of 300hp each for 75mph (65kts). In fact, as seen in the photos hereabouts, the 37-footer can run five 350hp outboards for 90mph-plus (78kts).

Clarke said the Midnight Express demonstrator was recently taken for a run from Sydney to Palm Beach on the Northern Beaches to test the performance. Averaging around 60mph (52kts) he said he was amazed the boat did the trip in only 17 minutes.

The centre console styled Midnight Rose is available for around $US500,000 as a quad-rig or $US550,000 with five outboards.

“This boat does have custom paint job, and is spec’d right up, including twin 19in Raymarine G Series screens at the helm,” said Clarke. “It also has two (standard) livebait tanks and outriggers, but apart from fishing, it will also make a great dayboat.”

“There is seating for 10 in comfort, including two bench seats in the bow area where eight can sit around the hydraulically-operated island table that also doubles as a daybed,” he said adding that the helm module houses a shower/toilet while a large Sony stereo system provides entertainment.

According to the distributor, the 39ft Midnight Express variants are used as high-speed interceptors by US Customs and the US Coast Guard from California through the Gulf of Mexico to Caribbean waters. The Columbian Government and several other Caribbean nations also employ the boats for similar duties, and in military guise the vessels can carry a .50 calibre machine gun in the bow.

“With outboards the 39ft boats have a range of 500nm but some are fitted with diesels for 1000nm,” said Clarke.