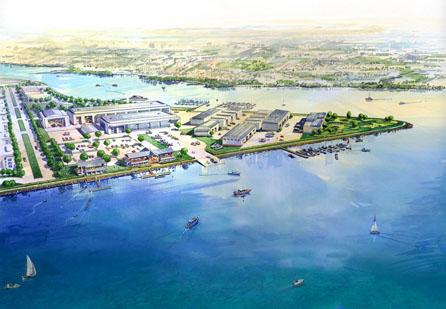 The NSW Premier, Nathan Rees, has announced the next step in developing the Homebush Bay Maritime Precinct, one of the largest marine industry districts ever to be built in NSW.

Premier Rees said the NSW Government was now calling for Registrations of Interest to kick-start the redevelopment of the Homebush Bay West site.

“The world-class precinct is expected to cost up to $300 million to establish, and create more than 500 jobs in construction,” Rees said.

“The 18-hectare site has 900m of waterfront access to the Parramatta River and Homebush Bay, and provides a unique opportunity for the boating industry.

“The boating sector in NSW is strong and one of the top seven industries, employing directly and indirectly more than 20,000 people,” said Rees.

The Boating Industry Association of NSW president, Doug Olding, acknowledged the Premier's comments on the strength of the industry.

"The annual turnover of the industry is over $2 billion. It is estimated that more than 1.5 million people go boating each year in this State and 480,000 people have a licence to drive a power boat,” Olding said.

“The Homebush Bay West site gives us a unique opportunity to create a world-class maritime precinct that will benefit the people of NSW for generations to come,” he said.

Rees said the call for Registrations of Interest to redevelop Homebush Bay West has two key objectives which are to:
* Seek and identify interested commercial parties with the necessary experience and capability to both develop and operate the proposed maritime hub; and
* Consult interested and qualified parties on the proposed formal offering of an Expressions of Interest early next year.

The Premier made the announcement while officially opening the Sydney International Boat Show at Darling Harbour last Friday and was joined by the Minister for Ports, Joe Tripodi, who said the site offered the greatest opportunity yet to support the boating community near the geographic centre of Sydney.

“This site provides an important access point to Sydney Harbour for the many boaters who come from the west and further a field,” Tripodi said.

“That access will initially come in the form of a major new public boat ramp to access the Parramatta River and Sydney Harbour. It will be part of the first stage of the project with construction expected to commence in 2012,” he said.

The NSW Government approved a master plan for the site in 2005 that permitted the following:
* wet and dry-stack storage;
* boat launching and berthing facilities;
* boat manufacture and maintenance facilities; and,
* ancillary uses including a rowing club, maritime studies centre and clubhouse facilities.

NSW Maritime is now seeking amendments to the master plan to enable:
* a greater amount of maritime-related floor space to be developed;
* a greater area dedicated to dry boat storage; and,
* provision for direct waterfront access by maritime uses to the Parramatta River foreshore.