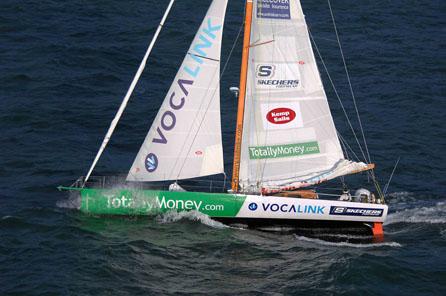 Following in the wake of young Aussie solo circumnavigators Jessie Martin and David Dicks, Mike Perham, a 17-year old English schoolboy, wants his name in the record books. But as he points the bow of his powerful Open 50 yacht towards the Southern Ocean and Cape Horn, he is not alone. Several degrees of latitude north another teenager, American Zac Sunderland, is also on the final leg of fulfilling the same dream.

The prize is the record for the youngest person to sail around the world, assisted. That last word is very important because two records are up for grabs: solo assisted and solo unassisted. Back in 1996, the unfortunate David Dicks’ voyage was downgraded to ‘assisted’ when he merely took a single bolt on board for a small repair, as it was deemed as outside help.

But behind all the record talk are two remarkable young men and at least 21,600nm of ocean. That number, 21,600, is the magic figure sailors must log under their keels to take the record. They also have to cross the equator and certain meridians to finish in the same port from which they originally departed.

FROM LITTLE THINGS
For Perham, the spark that ignited his dream of adventure began in a sheltered southern English lake on a dinghy that his father had given him. As he grew up he progressed to racing in the Solent, but he wanted more out of his sailing than simply racing around buoys.

Under the guidance of his father Peter, a sailor and former merchant seaman, he planned a big trip; attempting to be the youngest sailor to cross the Atlantic Ocean. His voyage in 2007 made global news headlines but there were critics. Some felt he was too young at 14 years and how irresponsible it was; while others complained that it wasn’t truly alone since his father had followed him in a similar boat. But the experience was invaluable for him.

“I learnt a lot and I learnt a lot more mental strength than anything else. If there’s one thing that has prepared me for this current trip it’s having done a long solo passage before,” he tells me in Hobart.

Perham looks pretty much like any other 17-year-old teenager. Fresh faced, medium build and average length mousy brown hair. As I talked to him, however, I realised there is much more than meets the eye. His maturity beyond his years is evident as he talks about the voyage and his early life that led him to it.

Back in England he had enrolled in a sports performance and excellence course and inspired by the likes of Jessie Martin and David Dicks, began planning his own adventure. The father and son team then went in search of sponsors. Aided by the publicity from the Atlantic project they secured enough initial interest to make the bold step of turning up at the 2008 Southampton Boat Show with their newly chartered Open 50, which was renamed TotallyMoney.com, in recognition of their primary sponsor.

“After that the funding really came pouring in,” said Perham.

RACETRACK PEDIGREE
With the sponsors came the professional shore team that worked fulltime for two months in a French dockyard to prepare the 1996-built Open 50. The boat, formerly Etoile Australe, has an illustrious track-record that includes wins in the Around Alone, the Route de Rhum, and speed records in the Newport-Bermuda race.

It’s a powerful beast of a boat, a sled to thrash downwind as fast as possible, with a tall mast and large cutter-rigged headsails. As I climbed around it, the flat deck seemed endless and in the middle sits a small pod, the cabin. With bulkheads taking up much of the interior and equipment and supplies jammed everywhere, Perham is crammed into a small berth, but rest is a rare commodity.

“The sleep pattern varies hugely,” he explained. “In the trade winds you can relax a lot more, but down south you can’t relax as much. But once you’re in the swing of things it becomes much easier and you can sleep for an hour at a time.”

STOP START
Departing England in November 2008, as advised by team meteorologist Mike Broughton, he headed south with strong following winds. The record attempt was under way and he hoped for a nonstop voyage that would take him past all the major capes — Cape of Good Hope, Cape Leeuwin, Cape Horn, and back up the Atlantic. But his troubles began early.

Despite the expert preparation, the B&G autopilot intermittently failed as he headed towards North Africa, causing him to go ashore several times in Portugal. Then while hand steering the powerful Open 50, and tiring, he again went ashore in the Canaries.

“I had the best weather window ever to go from Portsmouth to the equator and I probably could have done it in 10 to 11 days because it was just downwind, 20kts the whole way. So to set off with all these problems immediately was hard,” said Perham.

Coming ashore to fix the autopilot changed the voyage to an assisted record attempt, but an unperturbed Perham departed the Canaries, to round the southern tip of Africa, the Cape of Good Hope.

With the boat self-steering and the miles clocking up, he revelled in the daily routines of ocean life — checking the weather GRIB files, chatting on the satellite phone with his father Peter, enjoying his meals and catching short sleeps.

To maintain a daily calorie intake of 2000 to 5000 he had a choice of freeze-dried food and a few canned meals to mix up his diet; along with drinking water and fruit drinks.

The wide beam of the Open 50 requires two large rudders to control it, and while enjoying the sail along the African coast, he encountered his next problem. Any looseness in these carbon fibre foils, held top and bottom by large bearings, would spell trouble.

“The top rudder bearing — there’s basically a steel sleeve and that had worn through so I had to replace that at Cape Town,” Perham said. Also, while ashore the entire mast and rig was lifted out for a check.

THE AMERICAN CHALLENGE
Meantime, the clock kept ticking on the record attempt and another significant sailor was in town — Zac Sunderland. He was heading west across the Atlantic and Mike was heading south but in very different boats. The 16-year-old American has a small, relatively heavy displacement cruising boat with windvane self-steering, unlike the high-tech, fast planing hull of the Englishman. A classic case of the hare and the tortoise.

The Perham’s had plenty of detractors for their choice of boat. Notable marine journalists and famous skippers, including Skip Novak, thought the Open 50 sled was an unsuitable boat for a novice sailor to tackle a circumnavigation. However, among his supporters is a famous Australian solo sailor, former BOC 1990 yachtsman Don MacIntyre.

“It’s a very strong solid boat and what he is basically doing is under-sailing it quite regularly, but if he needs to put on the speed he can,” explained MacIntyre.

And the more miles Perham put under his keel the more he was proving his detractors wrong. He was still more than happy with his choice of the relatively complex yacht he said. A boat, he pointed out, that had been previously funded by the very best campaigns.

Leaving Cape Town, heading SSE at first to outrun a tropical low he then headed east across the vast desolate wastes of the Indian Ocean, finding himself becalmed for a week. Continuing south, he encountered his first heavy weather, off Australia’s southwest coast near Cape Leeuwin.

“I had a few days of 50kts-plus and I got knocked down by a big freak wave. The boat went well over 90 degrees
and my feet were on the ceiling at the time. The mast did go in the water so it must have been a big, big wave to get that steep,” Perham said. Describing the moment as “the scariest part of the trip so far” he had little time to ponder over it with another major decision to make.

The rudder problem had reoccurred, and as he celebrated his 17th birthday alone at sea, he looked at his options. With a leak coming from it, Hobart was the most convenient place to put in to have it re-glued before making for Cape Horn. He wanted a quick turnaround and worked hard to refit the rudder before heading out to sea and his next problem. The repair work had caused the troublesome bearings to leak even more water into the hull, requiring a second enforced stay in Tasmania of several weeks.

At last report, Perham was in Auckland, NZ, repairing his steering again.

“The arrival of the bearings is imminent and I'm very much looking forward to heading out into the Pacific straight after. In the meantime, I'm showing a group of sea scouts over the boat tomorrow night, which should be good fun!” Mike wrote on his blog at www.totallymoney.com/sailmike

Meanwhile, Sunderland has been stuck on the island of St Helena in the South Atlantic for weeks trying to repair his engine and steering system during the final leg of his circumnavigation. He still needs to sail more than 4000nm to the Caribbean, pass through the Panama Canal and reach up to Southern California. And all this by June, the start of the hurricane season.

Conversely, Perham faces the prospect of spending winter in the Southern Ocean and rounding Cape Horn. And for Australians, all eyes are on local gal Jessica Watson as she prepares to be the youngest solo-unassisted sailor. Interesting times for the young guns afloat.

Photos (coutesy of Kevin Green; totallymoney.com; Frantzesco Kangaris; and, Lisa Gizara): The Open 50, TotallyMoney.com, was built to be a fast single-handed boat; Mike Perham prepares his Open 50 to leave Hobart after repair work; Mike had to hand steer the 50-footer when the electronic steering failed – an exhausting task; Mike Perham at 17 is hoping to become the youngest solo circumnavigator; Zac Sunderland is taking a more low-tech approach than Perham, sailing a 36-foot Islander cruiser.