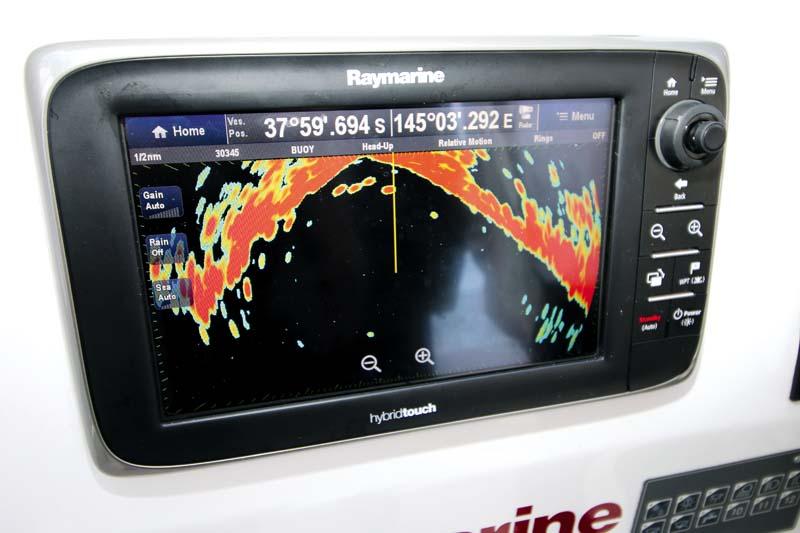 Our Haines V19R project boat — since dubbed the Nautek N19R, as this boat restoration was done at Nautek Marine — was nearing completion. Our next step was to find the best marine electronics we could get our hands on.

Our good friends at Raymarine came on board to supply the Haines V19R project boat with a full suite of premium electronics. Raymarine’s Grant Watson and Nautek Marine’s Michael Fitzallen jumped on board to teach this old sea dog some new tricks with the vast array of new equipment.

The long list of marine electronics to go into the Haines V19R project boat includes the following kit:

Nautek Marine planned the installation from the get-go, including a full remoulding of the dashboard to facilitate the huge range of electronic equipment.

The main visual elements are the e125, e97 and a68 multifunction displays. They actually have 12in, 9in and 6in screens respectively, allowing an amazing display of all functions at a quick-touch through the Raymarine intuitive LightHouse II user interface.

We have all the usual functions: sonar, GPS and chartplotter, with a full interface to engine and fuel data as well as radar and AIS. When you get used to radar it is quite simply very hard to live without.

In our Port Phillip Bay backyard the snapper season attracts thousands of boats across the bay, fishing both night and day. As much as we hate it, there are still those that fish without proper lighting and can make life quite dangerous.

Other visual limitations include the trend towards hardtops which can restrict night vision and actually give out false light indicators, particularly when salt has crystallised on the windscreen. We also hate to admit it but as we get older our eyesight gets worse and radar allows you to see all of the hazards around you.

Radar has practical considerations for offshore fishing as well. A small boat in a big sea has great trouble spotting bait schools on the surface being bombarded by rampaging seabirds. This is where we find the predators: the marlin, the tuna, the mackerel and sharks etc. If your radar is set correctly you can see the disturbance for up to three or so nautical miles around you.

The Raymarine radar unit has a maximum range of up to 48nm for terrific coastal scanning. It is also a great safety device as alarms can be set for objects both in front and behind your track, alerting the driver of impending danger. The new Raymarine RD418HD radar actually turns twice as fast as older models, greatly improving efficiency and accuracy. We find it actually aids navigation as you can easily identify both the coastline and objects on the water, and can be set-up as an overlay with your plotter for an even greater view of the world around you.

One of the really big new developments is the Raymarine Wi-Fi compatibility with Navionics, the interface combined with RayRemote and RayControl apps for smartphone and tablet. It’s actually quite scary to know that should you wish to interface through the apps, then all user information is transmitted for live updates to Navionics, continually updating all information including your favorite fishing spots. Navionics actually draws lines for every 2m.

This Community Edit feature may cause concern to some, and be a blessing to others, as no matter where you travel you may have access to others’ locations. However and most importantly, is the creation of accurate up-to-the-minute data available for real-time navigation. The RayControl also allows you to run the entire system from your phone or tablet using all of the functions such as sonar, charts, radar, data and diagnostics.

Apps are available for Apple iOS, Android and Kindle Fire, and purchased via the Apple iTunes App store, or for Android through the Google Play Store and Amazon Appstore. The system also connects with NMEA 2000 networks using Raymarine’s SeaTalkng network, giving boaters the ability to integrate AIS, autopilot and engine instruments. Simple Wi-Fi connections allow fast transfer of information and constant updates to be installed easily. You can also interact with many modern entertainment systems.

The Automatic Identification System (AIS) is an automatic tracking system for identifying and locating vessels by electronically exchanging data with other nearby ships and
AIS base stations. By simply pointing the curser to the target on the screen you can find out all relevant information about the vessel including name, type of vessel, identification details, course, collision alarm and speed. AIS uses the VHF transceiver through a splitter on the existing antenna for vessel-data transmission reception.

Our Yamaha F200G four-stroke outboard motor is hooked up via NMEA 2000 to the Raymarine SeaTalk NG system, allowing full engine diagnostics on any of the three screens, plus the Yamaha High Definition Display (6Y9).

A Raymarine LightHouse II feature we found invaluable was the all-new range-circumference screen where the unit shows us in real-time the available range, allowing for fuel capacity and fuel usage throughout the rev range with a moving circular readout. This ring tells us exactly how far we can go on the available fuel, allowing the driver to set the throttle to maximise fuel usage. It is amazing to see the changes in range throughout varying speeds – a real eye opener in fact. There’s no excuse for running out of fuel anymore, especially for those travelling long distances to the shelf in search of pelagics.

Traditionally the main two elements required by virtually all boaties are depthsounding/fishfinding ability and GPS navigation, preferably on a plotting chart screen. The Raymarine setup utilises the latest Navionics Platinum Plus abilities, including a vast range of views with radar and satellite overlays, panoramic port pictures to visually identify new destinations and dynamic tides and current information. Combine this with a satellite image overlay to find weed beds and channels to open up many new fishing opportunities.

I must say, I just love the sonar charts on a tilted 3D view and when interfacing with the depthsounder on another screen it almost gives the illusion that you are in the water with the fish and the reef and not just imaging them on the large screens.

TESTED ON THE WATER

With our Haines V19R ready rearing to go, I took Grant and Michael for a tour of a few of my defined structures in a range of depths to check out the responses – mind you it was the middle of winter at the time, so you don’t expect many larger species such as snapper in the bay at that time.

We plugged in the coordinates and set along the easily defined Course Over Ground vector track to our destination, a tiny reef in the middle of a virtual underwater desert. The first thing that hits you is the vision, not only through the size of the big screens but also from the low glare clarity.

Colour is our greatest aid when sounding. It identifies the strength of signal returns giving us the ability to identify bottom composition as well as fish identification. Many units have low-quality pixilation and power and hence a school of baitfish may well appear as singular larger fish, but not with the strength and clarity of our large-screen Raymarine e125 and e97 multifunction displays.

As we approached target areas Grant switched the Raymarine e125 to split-screen with full range and zoom to maximise the view. Sure enough, right on target, up came bait schools on the structures with small red arches to the sides indicating pinky snapper or similar. This is known as target separation.

We actually have two fishfinders in the Raymarine array running traditional sounding technology from the e97 and Dragonfly technology from the a68. Both these technologies are able to be integrated simultaneously with any of the Raymarine a, c and e range via a blackbox sounder module known as CP100. The transducers for these are available in transom-mount or through-hull. In the Haines V19R’s case, we have both transom-mount CPT-100 Dragonfly and P79 in-hull transducers.

It is fairly basic to understand. We need a wide arch in shallow water to give us some range around the boat. In deep water we need the strength of a low frequency to penetrate the abyss. Our a68 with integral CHIRP fish-targeting sonar and Dragonfly CHIRP DownVision technologies transmits a broad spectrum of frequencies returning loads of definition spreading through a 25-degree arc for high target separation for fish finding.

DownVision sends very high-frequency wide-angle sonar CHIRP beam for structure definition. In simple terms, we are looking wider and returning more, so we can easily identify fish arches and bottom structure. If you were using only a narrow beam in shallow water and you happen to drive over the top of a fish it would probably be displayed as an indiscernible red blob. The DownVision CHIRP looks 1.4 degrees fore and aft, but 60 degrees side-to-side for ultra-clear structure definition.

The Raymarine electronics package is a large array of equipment for a 19-foot trailerboat; however, it is certainly not unusual to see many keen fishos spending this amount and more on top-of-the-range marine electronics equipment. I recently inspected the flybridge of a large Riviera intended for long-range ocean voyages that had six 19in Raymarine gs19s across the console. Indeed, we’ve seen trailerboats fitted with nearly three times the value of the equipment in the Haines V19R in marine electronics!

We have been spoiled by Raymarine and the terrific support of our Haines V19R project boat. When you get used to all of the toys, you miss it when you step into a lesser fitout. The information provided by the system not only helps with our navigation and fishfinding ability, but it is a huge boon to our on-water safety as well. Raymarine has a huge range of quality equipment available across a price range to suit all budgets and when it comes down to it, you can quite easily do most of the functions on a single screen.

See the full version of this review in Trade-A-Boat #459, November / December 2014. Why not subscribe today?