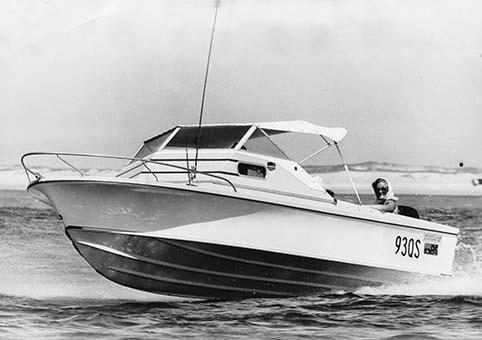 I always get a chill up my spine when the phone rings after 10pm. In this case it was the boss, who in a most excited voice exclaimed, “I’ve found our next project boat.”

My interest was sparked when he described a rather run-down old Haines Hunter V19R that he had just discovered in Sydney. The V19R has reached legend status amongst Australia’s trailerboating fraternity and historically, has provided the inspiration for many of our most popular modern offshore muscle boats.

The discovery of the Haines V19R was most fortunate. Few hulls have created so much interest with fishing and boating websites full of eager amateur and professional boatbuilders rejuvenating and refitting these wonderful offerings from yesteryear. This often causes the argument to arise about whether we’ve actually learnt anything about boating design and construction in the 50 or so years since John Haines Sr first used race-bred skills to produce those wonderful boats for an adoring Australian market. Of course, we have learnt many lessons in construction with the development of fibreglass and composite materials and methods, yet the good old formula of deep-vee design backed up with plenty of fibreglass, solid underfloor construction and simplistic, yet workable layout is perhaps more admirable today than we first gave it credit for.

As good as they were, these great old hulls are very dated by today’s standards. We’ve come to expect ergonomic mastery in our boats with all manner of creature comforts backed up by great function through deck layout and design. That first principle guided our major criteria — the transom height. There is a reason that most fishing boats now have 25in transom heights replacing the older 20in offerings. We’ve seen too many failures of older deep-vees with heavy engines drowning themselves as the wash rose over the transom and back into the boat through the slop stoppers (ie - the rubber boot where the steering, gear and throttle cables run through the engine well and back into the boat.) This was always particularly prevalent on the narrow-gutted deep-vees that sat deep in the water at rest. Add the weight of a few hefty fishos and many have found themselves in trouble before they knew it, as water flowed inside the transom, under the well and often into open bilges. There have even been fatalities but that’s another story.

Our V19 was quickly purchased, transported to Melbourne and stripped to her birthday suit. She certainly wasn’t a pretty picture with the obvious signs of a busy lifestyle showing in more than just character lines. The deck, helm, bow, and transom layout was primitive and certainly not enticing, nor functional. The fuel capacity and storage was minimal and the burnt orange colour scheme may have been popular in the 70s but not today.

Under its rough old exterior though, lay an extremely solid hull. While the transom felt quite solid it wept a bit when we removed the original Mercury 140hp Saltwater Series engine that had been fitted around 2003 and was in good working order. Hence, that first idea of a rebuilt transom now became essential — we needed a whole new look, not just an extension or jacking plate for the planned extra-long 25in engine.

While we were at it, we redesigned the underfloor to facilitate a larger fuel tank, and create some wet box storage, plus we built a more functional transom and work station — this was going to be a boots ‘n’ all sportsfishing weapon.

The fisherman’s telegraph soon whispered rumours and Melbourne-based Nautek Marine jumped to the front of the queue. They saw the potential and a terrific opportunity to showcase their many talents. Nautek is a complete one-stop boating shop with services including fully-qualified shipwrights, marine mechanics and highly-specialised marine electronics technicians.

See the full version of this story in Trade-A-Boat#449, February / March 2014. Why not subscribe today?