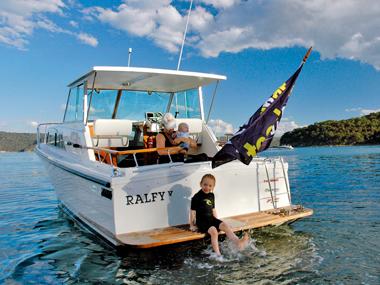 CAN A FAMILY OF four go from their spacious 42-footer with all the mod cons to Trade-a-Boat’s 1976-model Pacer 25-footer and survive three days aboard? That’s the question we sought to answer as we pushed the trolley full of provisions down the Royal Motor Yacht Club’s gangways at Newport, loaded the Waeco 12V loan fridge/freezer, tossed a spare disposable gas bottle aboard, stacked the bedding, and inflated the pool lounge that was to be our tender. Our Sirocco 2.2m Air Hull Yacht Tender hadn’t quite landed, you see.

Similarly, we haven’t installed the Fusion AV system as planned. But no matter, our feisty four-year-old Summer will be entertained at the beach and in the water. Otherwise, it’s a movie on the iPad or music on the iPhone. Which is to say nothing of the many apps she’s doanloaded with a largely Barbie theme. This is the way of the modern world, I’m afraid.

Thus provisioned, and with a full 200lt tank of fuel and 120lt water, we decamp and fairly fly down Pittwater. This was, as much as anything else, a homecoming for the Mariner Pacer 760. As we’ve said previously, more than 400 of the Pacers were built just down the road at Mona Vale.

The only unfortunate thing about our big event was the loss a couple of original windows during the boat’s trucking transit from the Gold Coast. The temporary clear plastic taped in place to keep the weather out would have to suffice. (Photos were shot during a subsequent Easter trip. More on that later).

A lot of interesting things about the Pacer came to light in the three days and two nights we were ensconced aboard with the rugrats and mum. We all hit our heads once when jumping down below, way too fast. As I said, you only do that once. The Caribbean and Bertram 25s were all the same.

More interestingly, the passage down Pittwater and around into Refuge Bay, which normally takes a good 45 minutes, was completed in an estimated 20 minutes cruising at 28kts at 4000rpm. The sweet spot on our MerCruiser 388 Stroker is 3800 to 4000rpm for 26 to 28kts. We’ve got surprising fuel consumption figures to share later on.

The first big realisation was that, in a lot of instances, you can get away without a tender on Ralfy V. With the Bravo III sterndrive leg trimmed up, you can anchor in about belly-button-deep water. Simply wade to shore holding the picnic basket above your head. Take the kids on your shoulders. This is what we did while parked off Refuge Beach on Day One.

After hours of frolicking, we grabbed a mooring a little farther out and prepared for dinner. Summer tested the hot shower in the head. This is the same heat-exchanger system as you’ll now find on the new Mustang 3200. Suffice to say, there’s abundant hot-water on call and thanks to a well-insulated accumulator tank, the water stays that way for more than 12 hours after the engine has been switched off.

That the shower water from the head in Ralfy V drains straight into the bilge is okay with us. There are decent bilge pumps to send it back overboard. Showered, dressed, and hungry, it was time for the obligatory toast to the day’s end. At which point we realised the value of all that rubber-backed carpeted cockpit space. It’s comfortable just sitting on the floor and enjoying the views.

We had oysters and champagne, then smoked-trout salad, as the four-year-old downed pasta with veggies cooked on the Rinnai stove. Surprise, surprise, this little gas stove in the cabin is fully operational and all you need to cook a hot meal aboard Ralfy V. The 14-week old had a milkshake on Mum.

As the sun sunk in the western sky, the terrific Stamoid covers on Ralfy V —

cut by Craft Covers, the best in the business — were fixed in place and zipped-up tight. We were now weatherproof. The escape hatch was cracked for some fresh air, as we prepared the beds.

Herein the second revelation: the sleeping arrangement on Ralfy V is a cracker. The converted dinette is long enough for this writer to sleep with legs outstretched. But it proved such a cold night, I eventually gravitated to the vee-berth with infill where the girls were sleeping. It, too, is long enough for two adults to sleep outstretched with a kiddie or two in-between.

We were cocooned by fluffy doonas and pillows and, without a ripple, sleep came easily. Just as quickly, the kids were stirring at dawn. Dewy covers were removed as Mum cooked breakfast of grilled ham, tomato and cheese on toast courtesy of the Rinnai. The twin-toast tray is used while the same burner heats a frying pan above. With good timing, you can whip up the perfect bacon and eggs.

We left for Bobbin Head to meet a new boat dealer, stretch the legs and buy a coffee and cake. After which it was down to Hallets Beach for a swim. Without a windlass, throwing the anchor might seem like a chore. In reality, it’s a snap. Once the 10m of chain is down, you just tie off the rope part of the rode that’s attached to your bow cleat and you won’t budge.

The local on-water vendor, Mark Walton from Brooklyn, arrives selling, among other things, local school prawns. Actually, we placed our order for 2kg the previous day and we’re now taking delivery off Hallets Beach. In a flurry of finger work, we shelled and devoured the lot in one tasty feast. Feisty four-year-old’s day was complete with another long swim and chocolate ice cream.

We shifted up the backblocks of America’s Bay for our second night, which went just as smoothly as the first. In fact, seasoned boater and crewmate Katherine commented how we were doing exactly the same thing on Ralfy V as we would be on our 42-footer. There might have been a few more bruisers, a bump on the noggin, but we survived a self-imposed long-weekend on the Mariner Pacer 760, with a renewed appreciation and authority for our project boat.

The boat’s builder, Bill Barry-Cotter of Maritimo fame said this restoration was an interesting reminder of how simple things used to be and how we made such good use of space back then. Elsewhere in this edition you’ll find a Mustang 32 test. That boat borrows on a fair bit of stuff aboard Ralfy V. Whoever wins our boat ought to be thrilled. The competition starts this issue.

Meantime, as I write this, we're on our 42-footer with Ralfy V tied up alongside. It’s Easter Sunday, we’ve been cruising the waterways and everyone is full of praise for our project boat. The sun is shining and there’s a steady procession of Ralfy V admirers dropping past to have a look.

For those with a big boat, Ralfy V would also serve as a great runaround. Its 350hp V8 means a beach, supplies, a change of scenery are never far away. Change your crew and ship new family in and out during the holiday season.

after running from Newport down to Refuge Bay, up to Bobbin Head, back around to The Basin, where another Mariner owner yelled “great job”, and fanging it back to the Royal Motor Yacht Club — after three days of boating, we had used just 68lt.

Since our first overnighter, we’ve slept aboard during the day after the kids have crashed. And we’re doing Easter breakfast aboard tomorrow. Even better, the Sirocco 2.2m Air Hull Yacht Tender with inflatable keel is swinging on a painter out the back.

That tender, which rows really well, is now part of the Ralfy V bundle, creating an all-inclusive package that I’m sure just about anyone and everyone would be happy to own.

Photos: Ralfy V at sea; Maritimo expertise shows in the beautifully restored interior from saloon; and the spacious vee-berth in the bow; the original Rinnai stove still works a treat; two adults and a kid, or two, can all sleep on the accommodating vee-berth with infill; Ed's wife Katherine and kids, Sandy (at left) and Summer, approve and reckon Ralfy is little different to the family's 42-footer, apart from the obvious size discrepancy, of course.