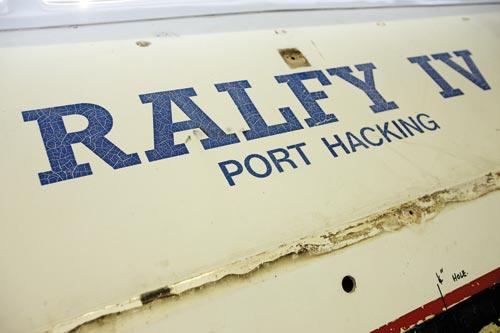 Painting. The secret is so often in the preparation. And it’s messy work. But get that right, fill, fair and sand the surfaces, then apply your paint, and — wow — the transformation is immediate. Fail to get your prep right and you’ll pay the price. Thus, painting doesn’t suffer fools and a great job comes from someone who takes pride in their work. An artist.

The allure of respraying your boat isn’t lost on the big paint companies such as International, Awlgrip/Awlcraft, Norglass, Altex, and so on. Betwixt these pages, at various times, they all advertise their paints, coatings and new whizz-bang coatings that can turn old Blue Bayou

into a head-turning
Blue Yahoo.

If you’ve been following the rebirth of our 34-year-old project boat, Ralfy IV, you will know the gelcoat and glasswork, while in surprisingly good condition for its age, was a prime candidate for a respray. In case you want to know, we used Awlgrip.

Ralfy IV was resprayed Maritimo white, since that is where she is being fitted out, at the Hope Island facility of the namesake boatbuilder, under the watchful gaze of Mariner founder and Maritimo proprietor, Bill Barry-Cotter. And with just a lick of paint — and a lot of preparation — the difference is amazing.

As with any new respray, the boat was filled, faired, sanded, masked and resprayed. Protective clothing was donned, spray guns were wielded expertly, and, like a new smile built from a bunch of tired teeth in a makeover show, Ralfy IV was soon beaming. So, too, are we.

Meantime, things are moving faster than the print presses at Trade-a-Boat. Ralfy IV’s project manager Phil Frazer is advancing on his critical path, which outlines when and what has to be done, and moving as fervently as he does with any new model Maritimo. Blink and there’s something else done.

His respraying facility would have otherwise been used for new plug work or to repaint hulls in customer-chosen two-pack combinations. So we’re really chuffed to have this equipment and expertise at our disposal.

“To date, there have been 35 man-hours spent preparing and painting the interior and 35
man-hours on the cockpit. It’s exciting, everyone’s looking and talking about Ralfy,” an upbeat Frazer says.

“The same people are fixing this boat as the team that makes our new million-dollar Maritimos. We’re using the same staff and the same systems. So it’s going to be special when it comes out the other side,” he said.

At the time of writing, the timber work was being revarnished — lots of the timber parts were remade onsite from teak and/or marine plywood using the original pieces as templates — there were new stainless steel parts from Bob Littler Agencies (BLA) and Jolly Roger. Oh, and the windows are being restored. They’re probably fitted by now
as well.

Before I could put the phone down, Frazer said he was about to pick up the stainless steel deck fittings after they were re-chromed. The engineroom and lazarette were on the verge of being flow-coated and, as I write this, the transom was being strengthened and the engineering was about to begin in expectation of the new engine — a remanufactured MerCruiser 383 Stroker, a 6.3lt V8 petrol inboard/outboard mated to a Bravo III sterndrive.

Meantime, here’s a collection of images shot along the way to Ralfy IV’s eventual relaunch later this year. Painting: The art of protecting flat surfaces from the weather and exposing them to the critic. Ralfy IV will survive the scrutiny.