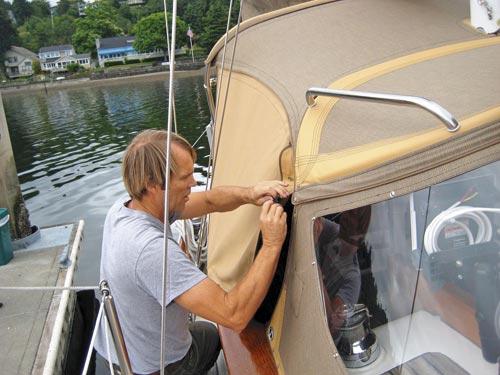 How To Re-cover your Boat

A quality marine canvas and boat upholstery project requires careful attention to detail. You'll need to pick the right fabric and thread, select the best marine canvas for the boat upholstery, and even decide on the specifications for grommets and zippers. Despite the technical issues, success with a marine canvas transformation aboard ship very much depends on the relationship between the custom boat cover fabricator and the boat owner.

"A major canvas boat cover refit is not unlike a home remodeling project, with decisions that have to be made daily," says Steve Mason, professional photographer and proud owner of Galatea, a classic 43-foot cutter-rigged Hans Christian ketch. "When we were redoing my boat, the fabricators put my number into their cellphone speed dials so that I was available for key decisions. It made a huge impact on the project."

Mason and his fabrication partners had a major marine canvas transformation, step-by-step, on-deck and inside the cabin. The project was sponsored by Glen Raven, parent company of Sunbrella fabrics, and was documented through photography, video and a progressive blog.

"One of our most important goals for this project was to demonstrate best practices for canvas retrofits," says Gina Wicker, design and creative director for Sunbrella. "We've not only documented the technical aspects of marine fabrication inside and out, we also captured the positive interaction that must take place between fabricators and boat owners for a successful project."

Jason Iverson, an innovative marine fabrics craftsman known for his signature dodger creations, was responsible for the exterior marine canvas. Iverson documented the fabrication process of the Galatea using video and blog posts, offering insights into design, fabrication and installation.

The transformation of the Galatea below deck was led by Pam Tregoning, who began her career in upholstery and awning fabrication, and has a specialty in boat and marine upholstery. Pam detailed the secrets to properly fit and function cushions and other fabric appointments below deck using photos and videos, and uploaded them to the Galatea blog throughout the makeover process.

Wicker served as the project's fabrics expert, offering input regarding material choices above and below deck.

The Galatea was selected for this project because it provided a large platform for fabricators to demonstrate best practices of design and fabrication, particulary when it comes to the fine art of boat upholstery.

Mason and wife Terri purchased Galatea in 2003 after years of sailing with friends, chartering boats and keeping a mental checklist of the qualities they would want in their own boat. Galatea was built in 1980 and spent most of its life in a freshwater lake, which helped preserve the boat's exterior.

While Galatea has been well-cared for, the Masons agreed that a fabric transformation was in order. With substantial blue-water sailing each year, Steve and Teri wanted better protection on deck from harsh sun, howling winds and heavy saltwater spray. Below deck, the boat had original green velvet fabrics, which were worn and did little to complement beautiful teak flooring and accents.

In terms of key takeaways from the project, Mason and Wicker emphasise the following essential insights that can be invaluable to fabricators and boat owners:

Lead time Allowing adequate lead time for each stage of the project is essential for quality and everyone's sanity. Mason recommends recognising the conventional wisdom that most things take longer than anticipated at the beginning of a project.

Quality When it comes to marine canvas, the emphasis must be on quality components and quality craftsmanship. Saving a few dollars here or there will likely result in even larger costs later for repairs or replacements.

Seamless look One of the striking elements of Galatea's makeover is how the canvas on-deck integrates seamlessly with the cockpit and on into the cabin. Fabricators and boat owners should consider the complete package, even if a total makeover is not planned all at once. In the case of the Galatea, Sunbrella's furniture fabric Linen Sesame was used inside the boat, while Silica Sesame was selected for above deck. The complementary colors tied the look of the boat together in a colour palette that helped maintain the yacht's classic look.

Interior fabrication look and feel Refurbishing a boat's interior is similar to redecorating a room at home, reflecting the owners' tastes in colours and design. The essential element is to consider the total look of a boat and how it can be complemented with new interior fabrics. For Galatea, the look had to be consistent with a classic design, yet reflective of the Masons' desire for a comfortable, contemporary environment.

In addition to new boat cushions, the marine restoration demonstrates how throws, pillows, window treatments and rugs can add cosiness, comfort and durability.

Interior fabrication performance Not only should the interior look and feel inviting, it must also be able to withstand the rigours of the marine environment. Galatea's cabin was outfitted with fabrics that are mildew and mould resistant, and easy to clean.

Have fun Everyone involved with the Galatea project was energised by the project and enjoyed the collaboration. With great communications and a sense of teamwork, fabricator and owner enjoyed the process and shared in a sense of accomplishment when the last snap was snapped.

"A boat owner who takes on a project such as this one should be open minded and prepared to be pleasantly surprised," Mason says. "As we went through the process, both of our fabricators on the project, along with Gina, brought amazing ideas to the table. The final result was not what I had imagined when we began. It was much better."

Gina Wicker, design and creative director for Sunbrella, worked with Steve and Teri Mason to select fabrics for the Galatea interiors. The final fabric selections brought a soothing color story to the space, with colors that complemented the wood tones and made the cabin feel more open.

A standard among Hans Christian boats, the green velvet's texture prevents slipping and sliding, but makes the cabin seem smaller with its dark color. The Mason's felt it was time to replace them with a lighter color that would make the space feel more open.

Pam Tregoning cuts Sunbrella fabric to be used for interior cushions for the Galatea.

Berths were outfitted in the soothing colors of Linen Sesame, Spectrum Coffee, Harwood Peridot, Dupione Peridot and a Sunbrella throw by Textillery for maximum relaxation.

The dodger was refabricated and a bimini boat cover created, making for an enclosure a private and protected enclosure. Great extras were added like a pocket inside the dodger for a flashlight — perfect for those dark nights out on the water.

Owner Steve Mason admires Galatea for her classic design, her line, and the way she looks on the water.