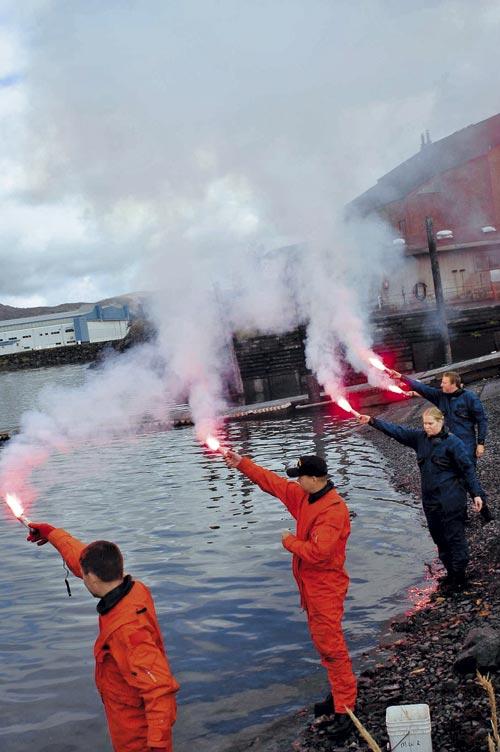 FLARE SAVER - HOW TO USE FLARES CORRECTLY

Celebrations such as Guy Fawkes in early November always bring with them their fair share of people who think that it is alright to let off their expired, or unwanted flares.

While it may be fun at the time, it is not only illegal and can carry stiff penalties (up to a $10,000 fine or 12 months’ imprisonment), it can also tie-up valuable resources. Imagine if you were on a sinking boat and sent up a flare when others around you are letting them off for fun.

The sinking feeling wouldn’t only come from the water around you, but the realisation that it could be a while before you are rescued. So, be a responsible boatie and don’t let off a flare unless you are in a situation that needs it.

HOW TO USE BOAT FLARES

This month we look at three very different situations that all have the common theme of flares.

The operator of a boat in Victoria’s Port Phillip Bay reported seeing a parachute flare in the direction of Mud Island. Coastguard only received the one report and decided to send a boat.

The boat was tasked and just after it was on the water, Coastguard received a phone call from a boat that had broken down. Asked if they had set off a flare, they replied “yes”, so the Coastguard had a pretty good idea of where they were. The Coastguard boat found them easily and towed them back in.

In a second incident, a person reported seeing a flare at twilight, in the direction of Geelong. Coastguard did an “All Stations” alert and a vessel responded saying it had seen a flare. It went to find the boat that had set off the flare — it had run out of fuel. It was towed back in.

Finally, a man on a PWC in Port Phillip Bay set off a buoyant smoke-flare following mechanical problems with his craft. A Coastguard vessel was soon on the scene and three privately-owned vessels also arrived to render assistance.

While none of the above was a genuine distress situation, if the boaties had not been able to make contact, or get help, it could quite easily have turned into one. By setting off a flare they were able to get the assistance that they needed.

The Coastguard says flares should be carried by all boaties and are a quick and easy way to let other boaties know that you need assistance. There are some important basic lessons that can be taken from these incidents.

When boating always carry at least two forms of communication devices in case you get into difficulty. Coastguard and other agencies can’t help you if you can’t contact them. In these cases, flares were used to draw the attention of other boaties. While flares worked in these situations, there are other ways that could have been more effective.

By far the best form of communication on the water is a VHF radio. When you use a VHF radio it can be picked up by a range of different people at once, whereas a cell phone will only be picked up by one person. VHF channels are monitored by the Coastguard, so there is always someone listening. If you have a cell phone, make sure it’s in a waterproof, sealed plastic bag.

As well as flares, other forms of communications include an EPIRB or even a torch.Always check the expiry date of flares at the start of the boating season. It is good practice when conducting a pre-season check to make sure the flares are within the expiry date. Old flares can become unstable and dangerous. Don’t try and save a few dollars by keeping expired flares and hoping they’ll work when needed.

When disposing of unwanted and expired flares, don’t fire them to see how they work. Drop them at your nearest boat chandlery. If it’s outside business hours, do not leave them outside.

Make sure you know how to operate your flares. Different types of flares are used for different situations. Make sure you’re familiar with the types of flares you are carrying and know how to operate them. In an emergency situation you may not have time to read the instructions. From time to time Coastguard and other organisations hold public flare demonstrations where you can hear advice from experts.