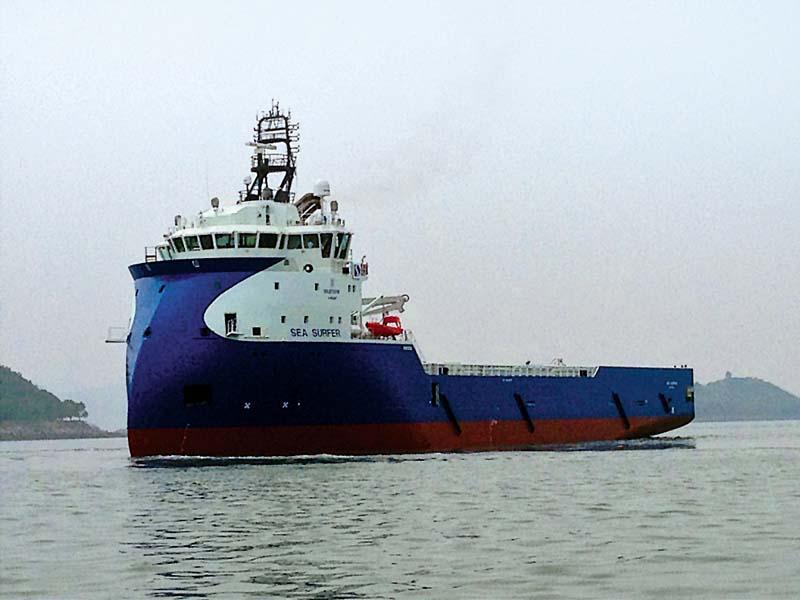 Australian Offshore Solutions (AOS) was awarded the charter of the two 89m PSVs, Sea Surfer (pictured) and Sea Swan. Commencing in October 2014 they went on charter to Offshore Marine Service Alliance (OMSA) for the supply and support of the accommodation support vessel Silja Europa at Barrow Island.

OMSA’s charter is for a nine-month period during which time they will be primarily used to carry freight and bulk from Henderson to Barrow Island and return.

The sister vessels were built for Cyprus-based offshore company Deep Sea Supply and delivered in July and September this year. They are a Rolls Royce Ulstein PX105 design and have been built to Clean and Comfort classification notations. Measuring 88.9m by 19m, they feature diesel-electric propulsion and provide approximately 1000m2 of deck space for cargo and a deadweight of 4700-tonnes.

The PX105 features the Ulstein X-Bow hull design, the advantages of which are claimed to include:

• Lower pitch and heave accelerations and the elimination of bow impact and/or slamming in the foreship;

• Less spray and negligible occurrences of green water on bridge deck; and

Deep Sea Supply said its bareboat contracts are for 270 days firm plus six one-month options. The total value of the firm part of the contracts is about USD$11 million.

Australian Offshore Solutions said the appointment of the two PSVs builds upon its existing marine manning and vessel chartering involvement in the Gorgon Project.

In other recent developments, Australian Offshore Solutions has been issued a Letter of Intent from Polarcus, a leading offshore geophysical company, for the charter of Offshore Discovery. The 48m offshore support vessel will be providing support services to the seismic vessel Polarcus Asima during its campaigns in Australia.

In September, Polarcus announced it had received contract awards from two undisclosed clients for two 3D marine seismic acquisition projects offshore Australia. At the time it said the combined program was expected to run for approximately 50 days and commence in the final quarter of this year.

In late October it confirmed the imminent commencement of a major new multi-client project over the Roebuck Basin, in the North West Shelf region. The survey will comprise approximately 15,000km2 and is designed to provide exploration companies with an extensive basin-wide high quality broadband 3D seismic dataset over and adjacent to the recent Phoenix South oil discovery announced by Apache Corporation.

The Offshore Discovery charter is Australian Offshore Solutions’ first with Polarcus but the company is no stranger to seismic work. In September it confirmed that the newbuild seismic support vessel Bourbon Grebe had mobilised to Australia manned with AOS crew. Bourbon Grebe is expected to be in Australian waters for approximately six months supporting CGG’s seismic vessel Viking Vision.