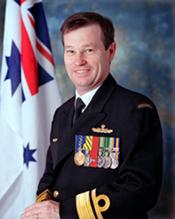 “Davyd is a dynamic, highly skilled executive-level leader and his capabilities are directly relevant to growing our business as a defence prime contractor,” said Bellamy.

“In addition to extensive fleet and ship operations and sustainment management experience within the RAN, he has strong international relations expertise gained through the successful management of Navy to Navy relationships with 14 different navies in recent years.

“That experience, and his recent activities within the Defence Export Unit, will be instrumental in supporting our international business development efforts particularly through the provision of strategic advice,” he said.

Rear Admiral Thomas said he was excited about the prospect of joining the Austal team.

“Throughout my career I have been passionate about championing the capabilities of Australian industry, and Austal is arguably the best example of a locally based company that has made a major impression in the global defence market,” said Thomas.

“Austal’s achievements, particularly its highly successful entry into the US defence market, demonstrate the world-leading nature of its technology and the company’s ability to develop and execute major strategy initiatives.

“Austal has a strong vision for further growth in the defence market and I look forward to applying my naval experience and skills to help Austal implement that both locally and overseas. It is an honour to join such a successful and highly skilled team,” he said.

Bellamy said Rear Admiral Thomas will be based in Austal’s Canberra office and will work across all aspects of the company’s defence business including ships, electronic
systems and in-service support.

“Having Davyd based in Canberra will assist in developing and maintaining client relationships within the defence sector,” said Bellamy.

“Of course, the principal players within the Australian defence organisation are there but so are many foreign defence representatives. That makes Canberra a natural destination for visiting overseas officials. Basing our senior defence representative in Canberra will make engaging our potential customers more efficient for all parties,” he said.

Rear Admiral Thomas served as Deputy Chief of Navy between June 2008 and February 2011.

Rear Admiral Thomas joined the RAN in 1974. A graduate of the RAN College at Jervis Bay, he served as a Seaman Officer in a wide variety of platforms, including patrol boats, guided missile destroyers, destroyer escorts and guided missile frigates. As a Principal Warfare Officer (PWO), he specialised in above-water warfare.

Admiral Thomas is a graduate of the US Naval Command College and has completed a Master of Science (Management) at Salve Regina University, Newport, Rhode Isalnd, USA. He completed the Advanced Management Program at Harvard Business School and is a Graduate Member of the Australian Institute of Company Directors.

Since transitioning from full-time Navy service, Rear Admiral Thomas has been working as a naval specialist within the Defence Materiel Organisation’s Defence Export Unit, helping to connect export-ready defence contractors with opportunities overseas.