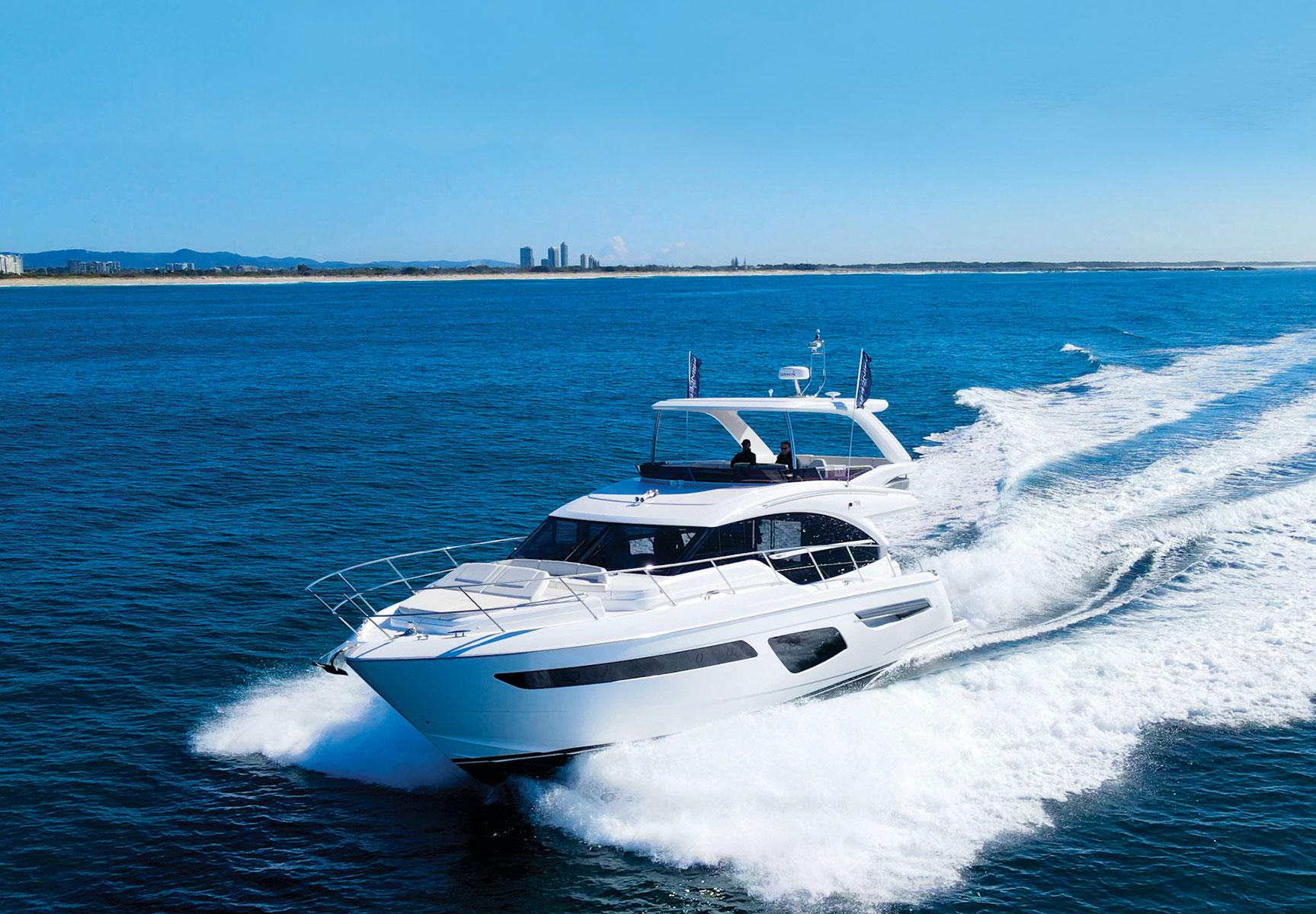 British Princess Yachts has delivered with their stand-out and well proven F55 flybridge.

Globally shared components, often competently integrated into various brands of premium motoryachts doesn't leave a lot of wiggle room to really shine. Which means there is a vast armada of these style of boats, as I see when visiting the leading international shows. Princess Yachts fully understand this after nearly 60 years of trading. So, when building the F55 back in 2017, it was simply more of the same hand-crafted quality with interiors from dedicated cabinet makers that really make these boats shine out in this crowded market. And amid the quality, is a deep attention to detail. Case in point is the curved grain-matched walnut panelling on the hull that arrived in Australia. To summarise, the F55 is a sporty, open-top flybridge cruiser with twin helms. The hull number clearly tells the success of this model, that is actually getting a cosmetic revamp for 2022. But only cosmetic because why change a winning formula after all?

Princess has been making quality motoryachts since 1965 with a range that currently runs from 35 foot to superyacht class 100 plus footers, produced by a workforce of 3,000 in south-west England at Plymouth.  It's a region I lived near and boated around for many years, so I know how steeped in maritime tradition this far-flung corner of England is. Princess's mid-sized F-Class (flybridge range) goes from 45 to 62 feet with four boats. I’ve fond memories of manning a Princess on the Australian west coast and Rottnest Island on a very distinguished 64 flybridge. It gave me a lovely steering sensation as I glided across the shallows around this most popular island; the open flybridge ideal for seeing the bommies as I sought an anchorage.

In fact, it is the open flybridge that really distinguishes the range and something that is ideal for Australia's mild climate, something Greg Haines at Princess Australia fully understands because he's brought in several over the years. Along with his experienced associate Scott Davis, they are a busy operation based on the Gold Coast. For 2022, some cosmetic details have changed, as visitors to the Sanctuary Cove Boat Show saw in the latest hull – which has reshaped hull windows.

Aesthetically, the raked profile may not catch the eye particularly at Cannes, or in fact Miami where I saw the first one a couple of years ago, yet it encloses a very functional and stylish motoryacht. Boarding from the wide teak hydraulic platform via one of two transom gates is a squeeze as the RIB is securely located there but a step-up to the cockpit reveals a comfortable and weatherproof space, dominated by the transom bench with folding teak table. Underfoot is the hatch to the engine room and another one to the crew cabin. This can be a self-contained ensuite arrangement with a single bunk and is well ventilated with fore and aft windows plus air conditioning. On the gunwales are oversized cleating and capstans for European style aft docking that can be fitted. Beyond is an outstanding feature on the F55, the grand entrance to the saloon because it has two large sliding doors plus a hinged galley window that completely opens the rear of the saloon. Combined with the adjoining galley, it creates a functional eating and cocktail space, thanks to the bar-top style layout. Given the UK's inclement weather, I could imagine having a cocktail or two here while watching the Cowes Week fleet depart the Solent. Views from the decks are also good, especially the foredeck with its Portuguese style walkway between the gunwales and the double elevating sunbeds. You can also rest easy because Princess Australia upgraded the rode with a large Ultra anchor and oversized vertical windlass. Moving aft, easily done because of wide side decks with heavy duty railings, takes me to the teak staircase leading to the flybridge. This really is another outstanding feature on the F55. Its open design with portside helm, wet bar and lounge aft is ideal for our Australian climate. Clear plastics can be attached to the slim struts, says Greg Haines, but in my opinion would spoil it and just cause windage. The aft lounge is also a dinette, thanks to the teak table and grill/fridge/bar facilities. There's also a liferaft slot here as well. At the business end, the console is slightly quirky in having the passenger seat inside but it means the driver is nearer the centre of the F55. Sitting here on the bucket seat as I glided along the Broadwater towards Brisbane was a thrilling perch and with great visibility. Most usefully, the twin helm seats are accompanied by L-shaped companion seating that converts to a sunpad.  The fibreglass hardtop just shades the Garmin Glass Bridge instruments enough to ensure they are readable and all the essential controls are the same as the downstairs console – Volvo joystick and throttles with tabs as well. Returning downstairs and stepping into the saloon is yet another pleasant experience on the F55 because, really, everything just looks right. By that I mean, the layout is sensibly done with galley slightly lowered on port, while the central saloon is raised so that the large side windows give panoramic views when seated. While a further step elevates the helm position on starboard. Apart from the expense, two consoles have other pros and cons. Impinging on the saloon space is the downside but offshore this is the only place I'd like to steer because the pendulum effect on tall flybridges in a swell will test even the hardiest of stomachs eventually. The inside console echoes the equipment layout of the flybridge but with hand-stitched leather bucket seats for really good posture and stability. Practicalities abound as well – the main switchboard is beside the console and has maintenance access underneath from the cabin, while an electric window lets the skipper give instructions to the deck crew. Behind the steering position is a magnificent lounge with sumptuous couches on each side, an industrial strength elevating dinette/coffee table and another illustration of the detail here are the wings on the couch ends for comfort at sea. Simply snuggle into the port one and click the 49 inch elevating television, once you've lowered the window blinds. Cabinetry is about the best I've seen for a while – curved walnut panelling with directionally laid veneers, inlaid with polished stainless steel and contemporary paint finishes contrast with the darker wood. Around the galley the cabinets bristle with branded crockery, fitted in slots and useful worktops for parties, complemented by the L-shaped work surface that demarcates the area, yet still allows two hostesses to prepare food. The fully equipped galley has a deep, square sink with both overhead and underside cabinets. Other essentials include a four hob electric cooker and oven plus a large dishwasher. Another Australian essential is the tall, upright fridge with a freezer beneath. Below decks is also a washer-dryer and with the watermaker fitted, there are no limitations on the H20. The atrium style layout of saloon windows above the stairs creates a grand entrance to below decks.

The lower accommodation consists of a full beam master stateroom aft with dressing table, breakfast area and en suite bathroom. While the forepeak has a VIP level of shared ensuite with a third cabin with singles on starboard. The voluminous hull allows all these cabins to be airy and stylish portlight ensures plenty of natural light as well. Stand-out details in the master cabin include the vanity with mirrored shelf and on port the lounge seating and table gave enough support to be used when seagoing; something that many other builders simply do not take into account. The only slight downside for seagoing is possible engine noise through the aft bulkhead; but not a problem at rest. The third cabin has two sizable single beds that electrically move together, and again plenty of natural light here as well. Leaving the busy Gold Coast behind took only minutes before we were among the islands on the F55, moving at its optimal cruising speed of 22 knots, which would give a range of about 300 nautical miles. The northern Broadwater has hundreds of islands and islets, as the Garmin Glass Bridge charting clearly showed at the flybridge helm. Its height really is essential, both for navigation and great views of these snaking waterways. Yet my hair was hardly ruffled, thanks to the visor and the overhead GRP top shading me, before I sought a change of view and moved below.

Comfortably seated, and underway I threw the F55 into some turns and even sought my own wash, given there was none naturally occurring on the Broadwater. No groans came from anywhere on the F55, even when I reached 33 knots with the hydraulic steering requiring minimum effort along with minimum use of trim tabs; showing a balanced hull.  Eventually I slowed to avoid our wake affecting a small yacht, which was also a chance for some slow handling. Clicking the button on the Volvo joystick engaged it before I began backing-up the F55. I imagined a marlin on the line as I arrowed straight astern. This Volvo EVC black box system cleverly controls the shaft drives without the need for the more vulnerable pod gearboxes by harnessing the fore and aft thrusters seamlessly. Done without vibration or delay, it allowed me to easily control the F55 despite a robust side wind. Alternatively, for around the deck a Yacht Controller wireless system is an optional extra that I found equally effective. Ideally I would have cruised further north on the F55, to my favourite sandbar anchorage at Jumpinpin or if windy, to hide behind Crusoe Island for a few days. But sadly, I had to hand the F55 back to Princess Australia.

Princess uses GRP resin-infusion with smaller parts hand-laid, which creates a more uniform layup and weight. The deep-V shape ensures a good motion in a seaway, with modest deadrise aft to promote planing, aided by the long shaft engines on Dripless seals, spinning four bladed alloy propellers. The engine room on our review boat was fitted with twin 900 Volvo D13s. Space around them was generous with filters forward, near the dual marine grade alloy fuel tanks. Behind them and rather too outboard for my liking was a Seakeeper gyro and 17.5kw Onan generator at the transom. However, this did not badly affect trim, I found when underway; requiring only moderate use of the tabs. Standard copper wire electrics were used, so simple and easily fixed unlike digital systems with numerous black boxes.

Spotlight on the Princess V50