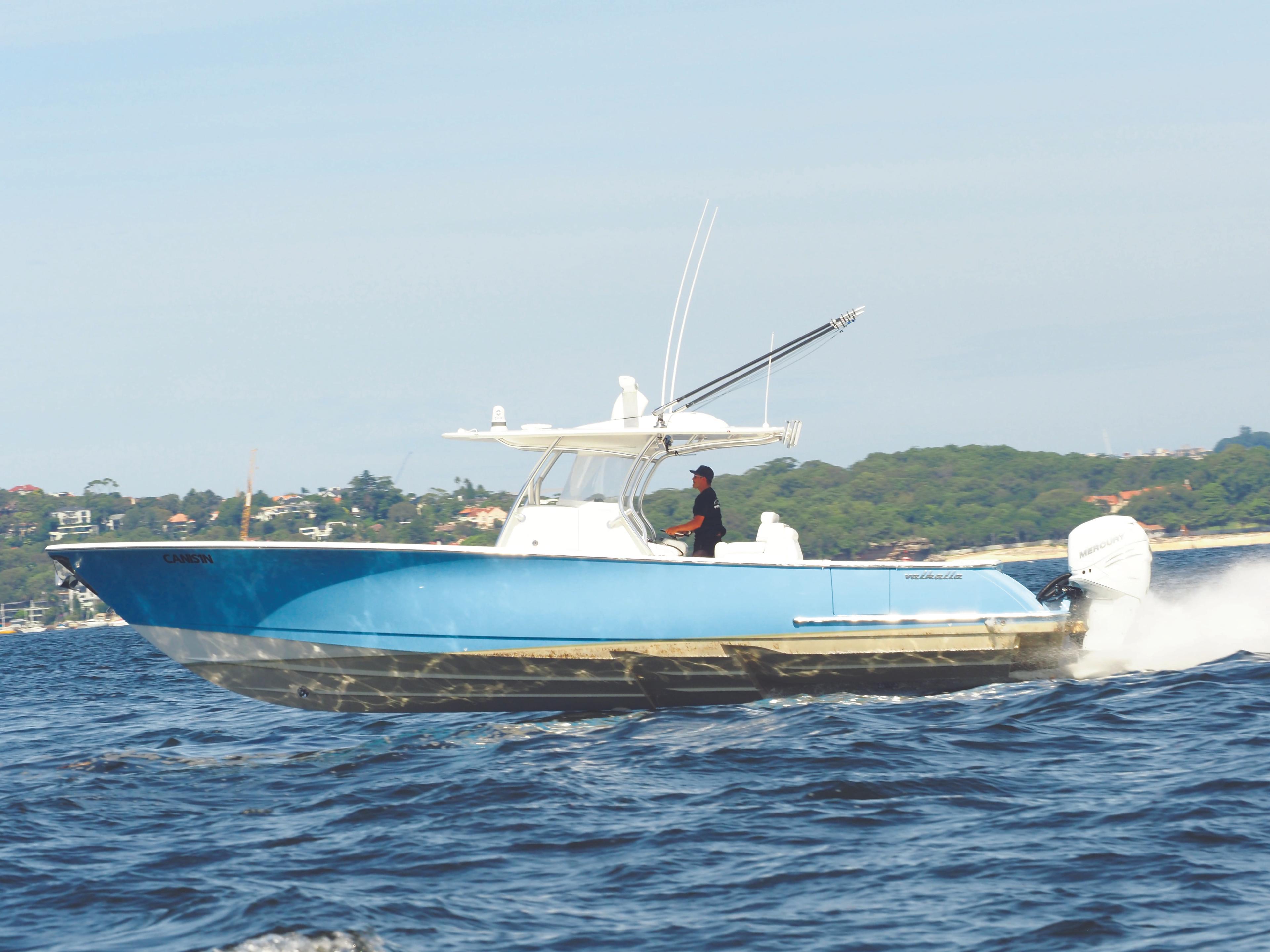 Return of the longship

Viking mythology tells us slain warriors find a place in Valhalla — a Nordic Hall in the afterlife that is full of bliss. So, Valhalla was a fitting name when Viking Yachts established a new boatyard in 2019 to introduce their brand of centre console fishing boats.

Viking is a family-owned business, and the new venture is run by the third generation of owners, brothers Sean and Justin Healey. Its long history as an iconic American game boat builder goes back to 1964, and since then, the company has built more than 5000 semi-custom vessels between 38–90ft.

Large, open recreational fishing boats like the Valhalla V37 are relatively new developments. Even so, there are already over a dozen builders in the US pushing the envelope of speed and range to open fishing grounds, particularly around the southern states, and advances in outboard power have accelerated the trend. These new motors are relatively light weight compared to diesel shaft drives, and power output has jumped in the last couple of years to 450hp — even 600hp at times. Additionally, the space an inboard engine would occupy can be given over to oversized fish boxes and increased fuel capacity.

Let’s assume Viking’s move to the new line of boats wasn’t just a case of jobs for the boys. In today’s time-poor culture, the trend away from expensive flybridge cruisers is growing. They are costly to run, need a dedicated crew, and are high maintenance. So, the need to diversify was clear and with nearly 60 years of boat building behind them, Viking was in the box seat to push into new territory.

The Build
A high speed and narrow centre console design was a step out of their comfort zone for the builder, so they looked to Michael Peters Yacht Design. Peters has made a reputation around revolutionary concepts and has specialised in stepped hulls since the 1970s. He conceived a twin stepped bottom profile for the Valhalla range that incorporated a tunnel with vertical sides aft of the steps. The Stepped-V Ventilated Tunnel, or SVVT, is a patented Valhalla feature that reduces drag by forcing air under the hull for a lower wetted surface. The lower drag increases speed potential and fuel efficiency, while at the same time the vertical surfaces of the tunnel at the rear planning surface act as a keel to benefit directional stability.

Viking’s wide-ranging and high tech resources mean that most componentry is built in-house, including the hull plug on a $1m five-axis profiler for a millimetre true design. Construction includes a resin-infused structural stringer grid that forms the immensely strong backbone of the hull. Elsewhere, a mix of solid and foam-cored layup goes into the hull, deck liner, and coaming moulds. Part of the process includes provision in the structural grid for a Seakeeper stabiliser, accessible for service through a watertight deck hatch.
The lines of the Valhalla 37 are stunningly pretty, with hints of tradition at the tumblehome aft and sensual shearline. Shimmering Blue sides soften the aggressive impression of the slightly raised and very sharp bow and prominent chines, but there are seven other colour choices, including a more battleship-like hue dubbed Shark Grey.

It takes a while to take it all in as you gaze from the ready-for-duty helm with a canter levered fibreglass top, to the outboard pod, where a trio of Cold Fusion White Mercury outboards champ at the bit. This is a serious big fishing boat, and it’s hard to believe there are three models in the range that are even longer! Onboard
A centrally mounted console is all business, so there is little consideration for dedicated sleeping quarters. That might be a surprise on a boat of this size, but there are practical reasons for this, including the fact hardly anyone uses their craft to overnight anyway. More importantly, though, the essence of the boat is fishing, so deck space is the priority, and the V-37 achieves an imposing amount of room for several anglers and deckies to move all around the boat when the bite is on in earnest.

Padded coamings and deep toe rails encompass the deck, while a recessed handrail is set low for looks and practicality for moving around in sloppy conditions. A hatch and a Lewmar winch and a bow-mounted stainless steel plough anchor are at the forepeak.
Seating is plentiful, and the diamond pattern upholstery is exquisite — so exquisite, in fact, that boat proud owners might even balk at the thought of fishy remains spoiling the upmarket diamond-patterned finish. Some covers might be a sensible option.

The three-wide helm features bolstered Release chairs with individual electric slides behind a high curved Costa Clear single panel screen. Further back is a lounge facing the lure action, as well as integrated Schmidt seats in the transom corners. Upfront, is a forward-facing seat ahead of the console, and at the bow are long lounges on each side are complete with high backrests will be a popular position on the run home from the shelf.
A cleverly engineered door opens on stainless steel arms parallel to the console, leaving access along the deck even when it’s open. Below is an electric head, sink, shower, and lockable tackle storage, which could double as a day bed for a svelte crew member if needed.

Storage is a high priority, especially for a potential catch. Four oversized floor-mounted fish lockers are scattered around the deck, including a 60in long, 550L version in the foredeck, and there’s ample dry stowage in the lower section of the console and under the helm seats as well.
Bait fishermen will be impressed by the sealed and blue-lined 210L tank centrally mounted at the transom for quick access. The custom Valhalla embossed lid looks ultra-cool. Variable speed pumps in the bilge mounted Hooker Sea Chest direct flow as desired from the helm. There’s no shortage of rod holders either, with 14 on the gunwales, six each behind the helm and at the front lounge and another half dozen in the rocket launcher. Of course, that’s not counting the storage space below.
Rounding out the fishing theme, tackle and rigging gear has their own place in compartments and drawers on either side of the helm seat and the hardtop sports roof-mounted electric teaser reels. Additionally, a set of carbon poles are coming.

The Drive
Engine options on The V37 include a choice of twin Yamaha 425s, a triple setup of Yamaha 300s or a trio of Mercury power in 300, 400 or 450hp. Our review boat sported the 1200hp package of Mercury 400s and the promise of 60kt — hold onto your hat.
The skipper takes the central position at a stainless steel wheel behind a wide dash that’s well-protected by the high screen. Ahead is a pair of Garmin 17in Multi-function displays set on a black panel and a neat row of backlit and well-labelled switches.
Our test drive included a run up Sydney Harbour to tally our fuel and speed figures and then an offshore leg into a short 1–1.5m sea and 15kt of chop. I should preface our performance figures by noting the bottom of the hull had some nasty growth on the unprotected surface, which could have slowed progress by five or six knots, so, the 53kt we saw rounding Middle Head is very impressive.

At speeds up to around 15kt, the bow rises just enough to block vision in close, making me nervous about the Sydney Harbour kayakers who seem to enjoy paddling in front of boats. As speed increases, the bow drops, and vision from a standing or seated position is perfect.
The 2.6L in-line six-cylinder 400hp engines have a turbine-like power delivery that accelerated the five and a half tonne hull quickly right through the range. Plant the throttles at 35kt, and the big deep-V hull jumps almost immediately to 50kt with a high pitch howl as the superchargers take flight.

The theoretical range between 25–42kt is fairly consistent around the mid 300 nautical mile mark, and that’s a distance that will get you into uncharted waters for fishing. It’s also a good indication of how well the hull works once it settles into its cruising mode.

The Wrap
Thanks to the distinctive blue livery of the review boat, the Valhalla is one of the best looking sports boats on the water. Its essence embraces fishing and getting to the bite in the quickest, most comfortable way. But the spirited safe ride easily carries over to cruising around your home port for some family fun days of swimming and sunbathing.
The base price of the Valhalla 37 with a trio of Mercury 400s is $890,000 but soon climbs once the fishing and styling options are included. When we add electronics, the hardtop, the Seekeeper (at $70K), helm and lounge upgrades, and game poles, we are looking at a sobering $1,155,000 or more.

Compared to a traditional flybridge game boat, you might say that’s good value. And for the time-poor fishing tragic with the capital to lavish on their sport, the Valhalla 37 will find the fish that are out of reach to most boats and have a hell of a good time doing it.