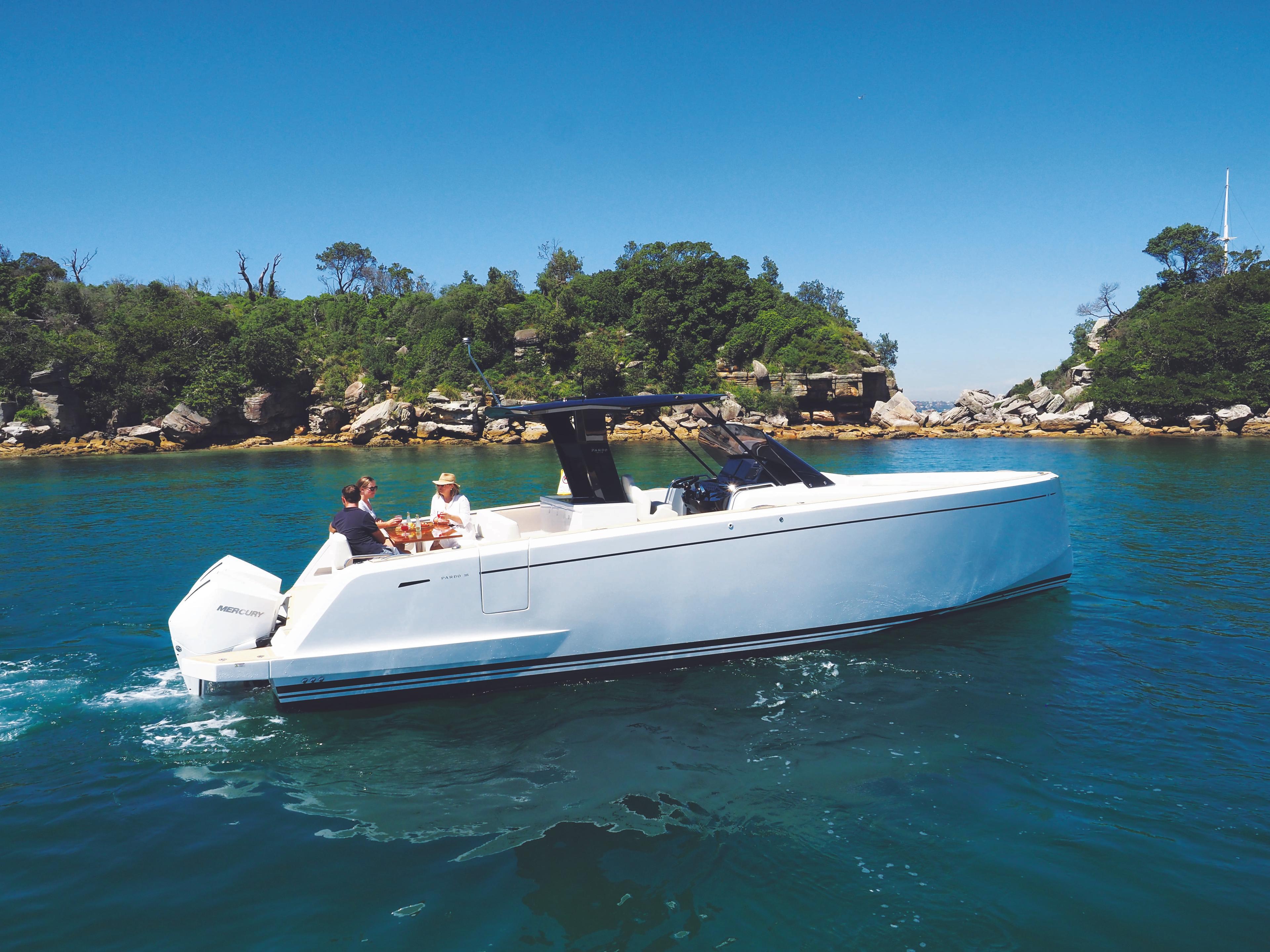 If you are after uncompromising performance and stunning modern looks, the Pardo 38 might just be the dayboat for you

The Italian boatyard, Cantiere del Pardo, has been building luxury Grande Soleil sailing yachts near Bologna, Italy, since 1973. But as Pardo’s Business Development Manager Rok Babarovic told me when we spoke on the phone as he drove along the Adriatic Coast to work, in the last decade, things have changed. Sailing and yacht building had hit the doldrums, and the company went searching for new horizons.

“People are now so time-poor, and sailing is a big commitment in both preparation and time on the water,” Rok told me. “After the production of over 4500 top-shelf yachts, we had to change the way we were doing things.”

The company recognised the growing trend in dayboats and realised they needed to produce a boat that could bring instant joy. Wally Yachts was getting traction with their new models, and many rigid inflatable brands were gaining converts as dayboats, but with a history of top-shelf boats, Cantiere del Pardo needed to offer something unique. Something luxurious, chic, and different.

By 2016 Pardo had teamed up with innovative marine architects at Zuccheri Yacht Design for a range of powerboats. When the drawings of the Pardo 43 were finalised, the initial plan was to build 15. However, the new model was an instant success, and orders flowed in so quickly that 25 boats were sold in 2017. Demand has grown ever since.

Realising they were on a winner, the yard followed up with a 50ft and then the 38ft on show here in 2021. Again, the boating public loved them, while the press loved the 38 so much that, against stiff competition, it took out the prestigious European Boat of the Year award.

The call to be different was taken up enthusiastically at Zuccheri. With a signature reverse bow, extreme flowing chines, open transom, and the walkaround single deck, the Pardo range has become a status symbol among well-to-do folk on the Med. In addition, the 25-strong in-house designers brought Italian flair to the fitout, so the chic demand was also achieved. Finally, nearly 50 years of craftsmanship has blended with a level of luxury that is surprising on a relatively small vessel.

When the Pardo is underway, you can see the sharp entry in the lower sections of the bow cutting its way through the water. As the hull lifts, the chines take on an even more aggressive look and direct spray down and away to keep the deck dry. Even in our fastest turns and over rough water during our drive, no hint of spray landed on deck, so there’s no chance of dampening that new Zegna shirt.

A lot of yacht building expertise has gone into the construction of the hull, where the aim is to keep things immensely strong yet balanced with sensible weight distribution. A single skin of vacuum infused layup makes up the lower sections, while the sides and deck are Corecell sandwich panels. A protective layer of vinylester sits under the topcoat of varnished neopentyl gelcoat for an enduring finish under the hot sun.

Simplicity is the catchword for the onboard experience. Every effort has been made to make the onboard experience a joy, with added touches of style to make it memorable. Attention to details, like the Pardo logos etched into the custom cleats, dedicated racks on the sides for bespoke rectangular Pardo fenders, and features of expensive carbon fibre are found throughout the build.

There are no steps to navigate on deck, and the high freeboard is safe for both young and old. That said, even though it looks ultra-cool, the open transom might take a bit of getting used to. As well as an inward opening gate — sensible for pulling up against a dock — there are fold-down platforms on the side decks that will help access over the side.

The Europeans call this style of boat a ‘walkaround’, and you can happily stroll around the whole deck with ease. Seating is scattered throughout and, with room for 16, everyone should find a comfortable possie. Access is broad and unfettered all the way along each side to the roomy bow where the synthetic teak clad gunwales meet in an artistic display of fine joinery. These gunwales are wide enough and just the right height for sitting, so it adds even more space for casually mixing with guests.

Ahead of the helm is an extended lounge, where two can stretch out or share with half a dozen or so. Overhead, a sunshade rolls out to moderate the rays. At the forepeak is a hatch to the ground tackle with a remote-control anchor that appears out of an electrically operated door in the hull when it’s ready to deploy.

A dinette in the cockpit has a natural teak table with white Silvertex-clad lounges that can flip to forward or rear-facing positions for driving or dining as the mood takes you. The table drops on a stout stainless-steel leg to form an extra-large sunpad. And again, there’s a sunshade that deploys on very tricky carbon fibre wands to minimise the glare.

As with all outboard-powered boats, access to the water is limited around the engines, but the Pardo 38 has a nifty swim platform folding down ahead of the three Mercury motors as a clever compromise.

A compact galley with a tinted glass cover over a recessed cooktop and a moulded sink is between the dinette and the helm. Storage and two fridges are under the bench, and there’s another drawer fridge below the lounge console.

Rok told me that less than 10 per cent of European owners stay on their boats overnight. Many are based in the Med and have larger boats or waterside properties, and the Pardo is a water toy to suit their lifestyle. I suspect it might be the case here as well, but the idea of extending a day on the water has its appeal, plus the accommodation space is roomy and inviting with a large island bed and occasional guest cabin.

Access is five steps down through a sliding door forward of the portside helm seat, and the light oak and glossy white gelcoat of the interior offers a modern and classy impression. The island bed is an inviting prospect, and with a high ceiling and wide walls, there’s a great feeling of space. High windows along the sides are set into a wide panel of soft furnishing that adds to the appeal. Together with an overhead hatch, the area is bright and airy.

To starboard is an oak and composite wet head with a shower and an electric Techma toilet. Ceiling height is generous, and an opening port offers light and fresh air.

Like many boats of this size, a second sleeping space is found to the rear and tucked under the cockpit.

But here is a pleasant surprise: the ceiling is relatively low at the entry, but there is standing room halfway along to facilitate dressing and eliminate the feeling of being too confined. Rok suggested that some families on the Med with younger children like the idea of extra beds on board, but it’s an option if a couple of guests want to party on.

A three-wide helm has bolsters and a central driving position behind a black carbon fibre helm. The helm chair is well contoured for comfort and support, and the view through the raked screen is unhindered.

Overhead is a carbon fibre T-top with tinted glass panels. It gives excellent weather protection to the helm and supports the electrically extending rear bimini and removable shades over the rest of the boat for use when anchored. A raked and tinted screen deflects wind, and there is an option for winter weather infills if needed.

Joystick controls ease docking and rafting up, and a set of Zipwake actuators take care of trim when underway. These features should have even new boaters quickly at ease behind the wheel and add to the simple pleasure of driving for old hands.

You can order a Pardo 38 with an extensive range of power options, including twin diesel or petrol Volvo inboards and a mix of outboards up to triple 350hp Mercury Verados. Twin 300s is the standard package for Australia, and the triple package of 300hp engines on our review boat comes at a $72,984 premium.

Rok told me the light weight of the outboard package combined with its deep-V delivers a ride that is sporty yet nice to handle. Unfortunately, I didn’t get to try an inboard fitout for comparison, so we will have to take his word for it. What I can say is that our review boat handles like it’s smaller than 38ft and has sparkling performance through the engine range.

You might imagine triple propellers on a relatively narrow hull might cause turbulence, but there was little evidence of cavitation up to planning speeds as we set off. Once we were moving, the acceleration and performance were smooth and predictable right through to a maximum rate of 45kt. I saw a slow cruise of 24kt at a steady 3500rpm where fuel consumption sat on 94lph from all engines. Expect a range of 232nm with 10 per cent in reserve.

Push on to 35kt, and the range is a similar 200nm if you want to reach your destination in a hurry. At 30kt, the ride in the harbour’s choppy conditions out past the heads into a 1m sea was soft and dry.

In a few short years, the Pardo range has been established on the back of Grand Soleil as a high performing and prestigious brand. At around the million-dollar buy point, it’s not for everyone, but for those who can afford one, that’s part of the point. Resale value in Europe has stayed high, and it should be the same here.

The Pardo 38 is made for fun. It’s a sparkling performer with the 900hp package. It’s easy to drive and easy to live with, and with room for over a dozen guests, it’s ripe for entertaining on the water in all major ports.

Curious to see if any Pardo vessels are currently listed for sale? Head over here.