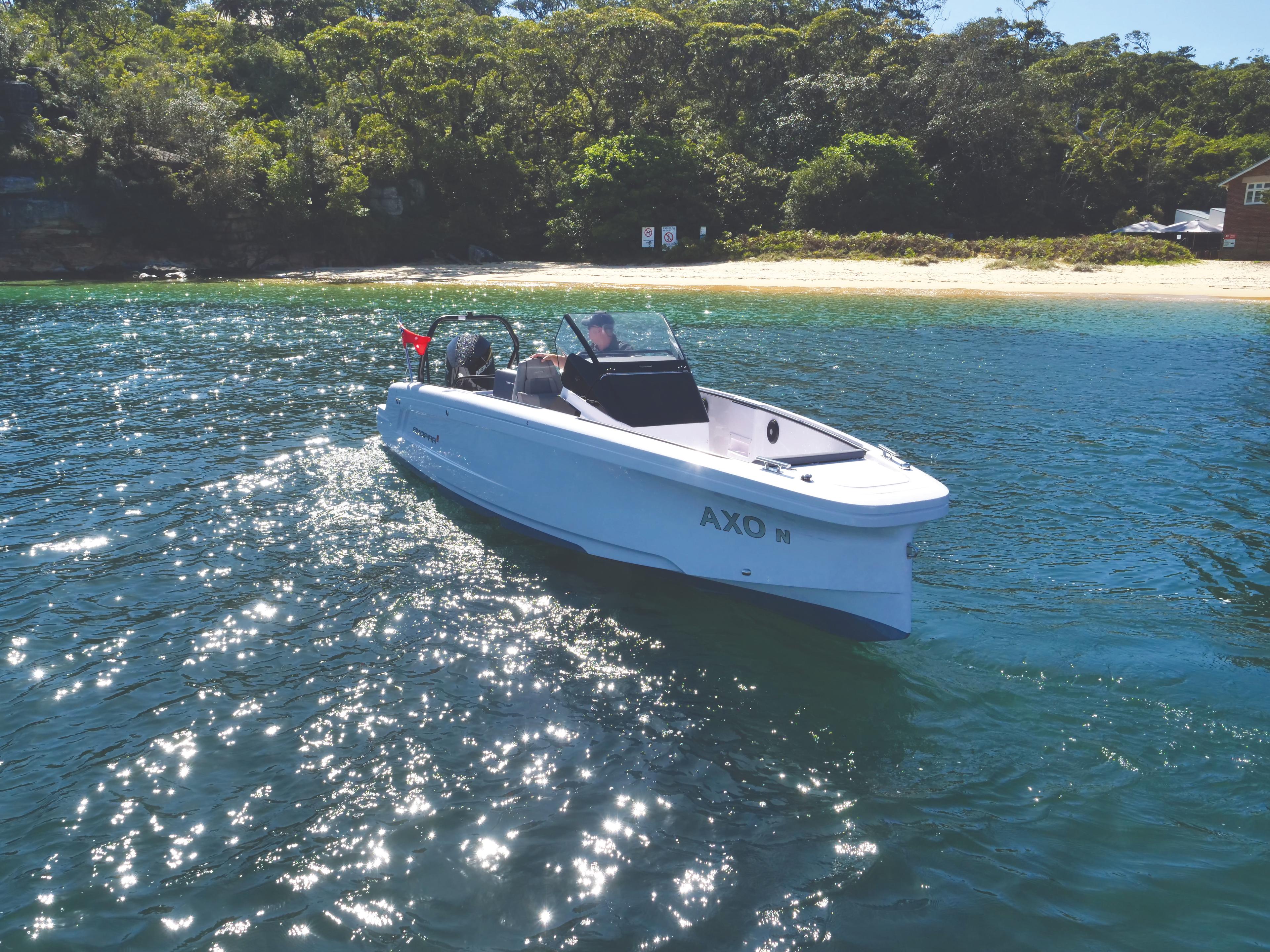 Axopar's latest release distils its DNA into a smaller package

The Axopar success story rolls on with the release of their smallest model yet. According to the company, the latest 22 has been the most complicated design process to date for a model aimed at a wider appeal, especially to a younger audience.

When company co-founder and creative director, Jan-Erik Viitala conceived the designs for the original 28, he heralded a new style of ‘adventure’ boat. Between now and then, he has seen over 3000 boats out the door to every corner of the planet. The theme has been copied by at least three other companies with various degrees of success and has been a runaway triumph for Axopar and their dealers around the world. Australian distributor Peter Hrones was an early adopter of the brand, but even he stuck his toe into the Finnish water with some trepidation.

“We bought two 28’s when I first saw them at the Dusseldorf show in 2014 and when they arrived in Australia people just laughed, telling me they would never sell,” he said.

How wrong they were. Those naysayers would be wishing they got in on the act because eYachts sell every boat they can get their hands on, and already have close to 200 happy owners around the country. For their efforts, the eYachts team won the Axopar international dealer of the year in 2020. “We have owners of 40-60 foot boats downsizing to the 37 and the 28 simply because of the ease of use and the sheer enjoyment of driving,” Hrones told me at our review of the 22.

I must agree. Over time, most of the boat testers at Tradeaboat have undertaken reviews of the various models and everyone has come away with a glowing report and a big smile. The American Boating Magazine gave the 28 their boat of the year award in a hard market to crack. It has been the same from every boating publication worth its salt.

But when I saw the specifications for the 22, I wondered if the team had ruined the dimensions because the boat looked decidedly narrow in comparison to the larger boats in the range. In what would seem a design dilemma for co-founder and head designer at Axopar, Jarkko Jamsen, he aimed for the best possible stability possible in a 22ft trailable boat but with a maximum beam of 2.3m to fit into a container for export. Through his Aivan design company, Jamsen had the advantage of recent improvements in computerised rapid modelling techniques to maximise the potential of the hull shape. Computer Fluid Dynamics (CFD) enabled the team to see in virtual reality how water pressure worked against the hull, but they also built wooden mock ups and tank testing to confirm findings.

My first sight of the boat confirmed that when the Axopar team rewrote the book on marine design with the first 28, they left out the chapter on traditional boating aesthetics. If the design need a sharp bow to work at its best, that’s what it got. If the freeboard had to be a certain height or the centre console had to be placed in particular place, then that’s what happened. They determined what was needed for the boat to work, rather than working to a predetermined contract on how it should look.

The 22 follows the theme with sharp lines and complicated radical shapes that sets the Adventure style apart from the mainstream. The new boat stands out with a purposeful, aggressive presence that turns out to be authentic, and I love it for its honesty.

The layup is hand laminated with a vinylester first coat for osmosis prevention and the hull is formed in a split mould process that is both time consuming and more expensive.

When I asked Viitala from his home in Finland how the split mould worked he explained that, “The laminates are uniform and one piece. It’s only the mould that will split so we can remove the hull from the mould after it’s been laminated. The mould is split both lengthwise along its entire keel, as well split transversally at the transom. “Utilising this more costly and complex split mould solution we gain major benefits for the boat. Firstly we get the widest point of the boat to the aft rear chine, for added stability and handling. Secondly, we also enhance the youthful appearance and design of the boat further, and, thirdly we get a stronger hull construction as the recessed shapes also strengthen the sides of the hull.”

The front profile has the established Axopar reverse bow that sits above the waterline even at rest and quickly pushes out to a pronounced flare high against the gunwales. This is designed for enhanced buoyancy to stop the front end dipping below the water in a rough sea. Big chines lower down deflect water and run back to the first of two steps under the hull. According to Viitala the steps are designed to suck air under the hull to create a platform of what he calls “air lubrication” which delivers less drag and increased stability.

The wedge shaped footprint of the design leads back to flat hull sides that enable that full beam at the transom for maximum stability both at rest and when running. Running strakes under the hull help with lift and because they run parallel to the centre line, help directional stability.

After two years of testing in the wild Finnish environment, the boat passed Norse Veritas certification before its virtual world launch in late 2020.

Like all the brand’s models so far, the 22 will come in a variety of configurations to suit a world market with differing expectations. Our review boat is the first example to hit our shores as the base Spider version with a ‘multi-storage’ compartment layout. The T-top and up-specced X Jobe versions will follow at the Sanctuary Cove Boatshow.

As we work back, the versatility of the design starts to show. A slot in the floor accepts a fibreglass table on an alloy leg and there’s a second seat on the leading edge of the centre console for social dining. And for a 22ft boat the inclusion of a head in the console will be a welcome option for families. The photos here should show it’s roomy and has easy access. The option includes a sink with fresh water from a 42L tank.

The centre console has a neat trick — the tinted Plexiglass windscreen can be raised much like one on a touring motorcycle. It can then deflect wind over the driver and passenger according to their standing or seated height. Twin two-tone (Sterling and Storm) Silvertex clad helm seats include high bolsters or secure padding and there is an angled footwell to get secure positioning when driving the boat with gusto.

According to the Axopar philosophy, the dash is kept deliberately simple so there is nothing to distract the driver from finding what they need in a hurry. An 8in Simrad screen gives engine info, and any navigation needs, and a line of push button switches powers accessories. The engine controls sit to starboard of the racy leather clad wheel in a perfect symmetry of ergonomics. The Fusion sound system is limited to a small control panel and apart from the Mercury start switch and a joystick for the trim tabs, and that’s about it.

Those helm seats slide back and forward and spin around to the cockpit for socialising with the crew. The boat has a maximum capacity of seven and there are variations of seating behind the helm

As mentioned above, the review boat has the multi-storage compartment aft deck arrangement with a generous central fibreglass moulding, topped with a padded seat. A seat back moves to make a forward facing bench for two or a back to back sideways seating for up to six where the navigator can join the party at the back to make up the numbers. To add to the mix, you can use the seat back as a pillow on the sun pad or store all the soft furnishings in the storage box and go fishing.

The other options here are a U-shaped sofa or a standard open aft deck with a two-seater transom lounge.

The whole purpose of the smallest Axopar was to bring the excitement of Adventure boating to the masses, so anticipation was high when we hit the water. A 1.5–2m sea was running off the heads and the 15kt breeze was kicking up a decent amount of chop on Sydney Harbour.

Peter Hrones took the helm first so we could get some images from the camera boat and the happy look on his face as he gave the 200hp engine the berries said it all. With the photos in the bag, we had to coax him away from the wheel so I could have a turn. After getting used to the ride on the choppy harbour we again headed seaward, and I must admit I am a convert. Whatever Jamsen did at his computer, he nailed it and my misgivings are misplaced. There is nothing virtual about the 22’s performance — the boat is the real deal.

The ride in a decent swell is phenomenal but the photos probably don’t do it justice. That said, there is nothing showy or dangerous about how it handles. It just sticks to the water like its nailed there at over 30kt. Back across the 50mm harbour chop, I kept pushing the throttle forward and the ride just got better all the way to 40kt. I have never experienced such a safe and comfortable a ride like that in a boat anywhere near its size. I could feel the boat working to stay flat and it kept true to direction and without chine walking despite the side wind and across the sea.

In turns the hydraulic steering stays light and the boat goes exactly where it’s pointed without any wallowing or cavitation. Back in Middle Harbour we ran some speed and fuel usage runs and they proved very close to the factory figures. And, to be fair, the fuel usage from planting speed to 30kt is exceptional.

Acceleration saw little rise of the bow and by 3000rpm we were out of the hole at 17kt for 18L/h and a range of 195nm with 10 per cent in reserve from the 230L aluminium tank. A happy cruse of 22kt saw an extra 1L per nautical mile fuel burn at an extra 500rpm for a safe range of 207nm, and that’s very good economy from the 200hp V6 Mercury. Wide open throttle delivered 42kt and a 64L/h fuel burn.

I recently saw an interview with Jan-Erik Viitala, who claimed his favourite combination for the 22 was the Mercury 150 which would run to mid 30kt speeds with better fuel economy than the 200 — even a 115 will get over 30. I’m not entirely sure he wasn’t engaging in some marketing speak to boost sales of the cheaper package to new owners but with a sly wink to the rev heads on the sidelines. The 22/200 package is the duck’s innards. It’s dope and rad and I just wish it wasn’t $165,000 landed in Aus, because everyone should own one.

For me, I can see the cushions stowed away and a set of rod holders replacing the ski poll on a run to the shelf on a snotty grey day, which is what I’m sure that’s what those fun loving Fins had in mind.

Keen to read more about the Axopar fleet? We've got you covered.

Check out the newest Axopar releases and boats for sale here.