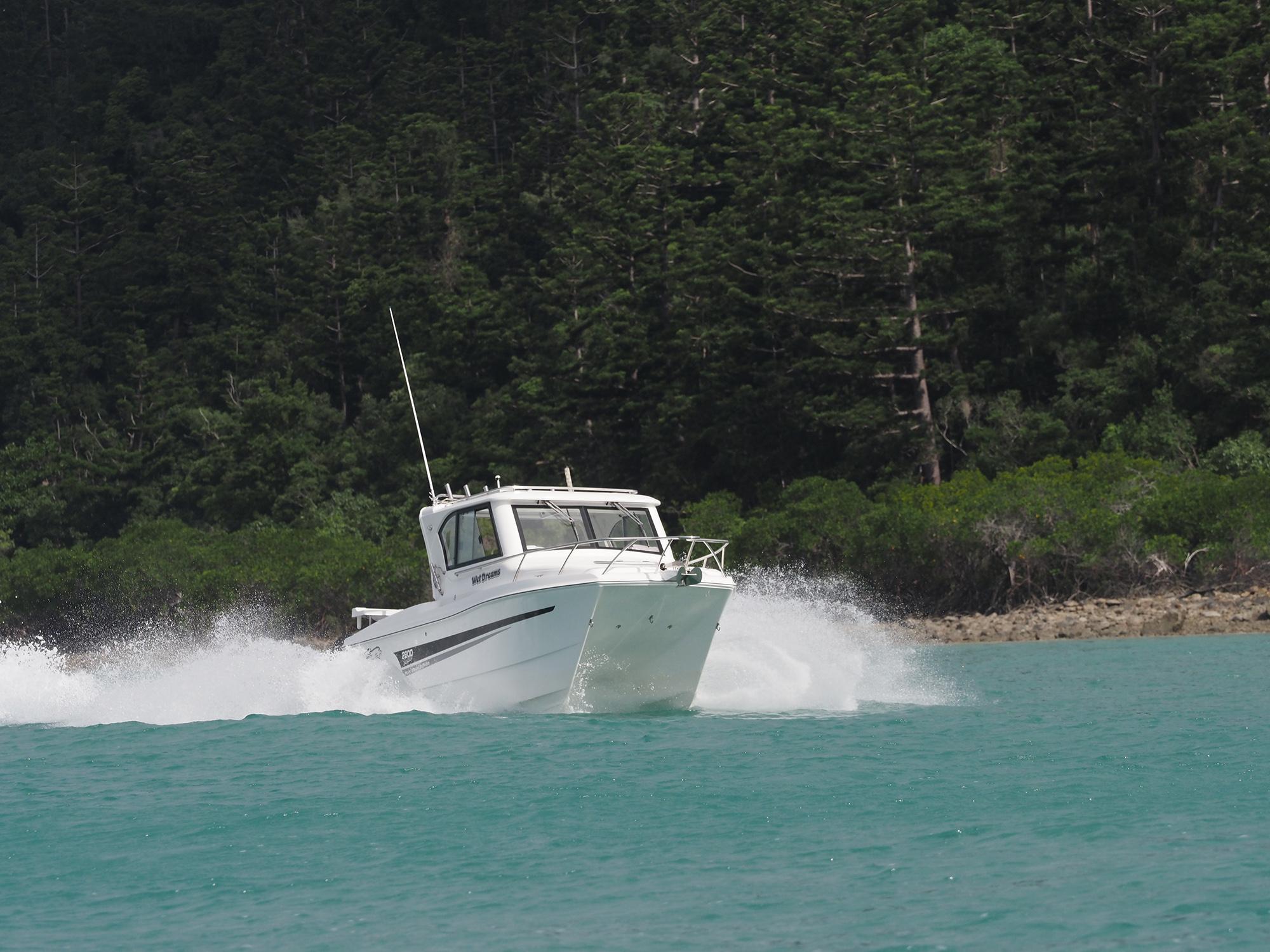 Power to the People

Our review of the 7700 Powercat was one that nearly got away. We followed the build and planned a test run on Moreton Bay, Qld, when it was complete, but travel arrangements fell over, and the boat shipped to its new home in the Whitsundays. But, I ended up with an opportunity to catch up with the new owner when other commitments saw me in Airlie Beach for a week, so we went for a run through the islands it now calls home.

For a reason that’s hard to define, most of our power catamaran builders come from Queensland — even the alloy Sailfish brand hails from just south of the border, so there is a clear interest in twin hull construction in our warmer climates. Maybe the love of multihulls harks back to the almost mythological Bruce Harris Shark Cats out of the Gold Coast over 50 years ago.

The cats’ design earns its chops from the soft ride generated by the tunnel effect under the hull, as the mix of air and spray is compressed when the boat lands after crossing steep swell. Since the layout takes the beam forward to the bow, these boats have much more usable deck space than a monohull. Cats also lend themselves to cruising tropical waters thanks to a shallow draft and easy level beaching on the sand. Add in a self-draining deck and a generous amount of carrying capacity, they add up to a very useful fishing and cruising potential.

Powercat has been one of those reliable Queensland builders since the late ‘70s when John Egar left Shark Cat to begin his own operation. Over the boom times of the ‘80s, their fleet grew to vessels as long as 66ft, but more recently, the range has stabilised to three hull lengths between 7.2–9m (23ft 6in–29ft 6in). A variation of layouts and weather coverings combine for a total of nine models.

Of the three models in the 7700 series, the Sports Sedan is the recently released hardtop version and joins the more basic Sports Fisherman and the Cabriolet. At the same time, the 7000 Pioneer is a shorter version from the same (blanked out) 7700 mould.

The 7700 is a big boat to haul around on a trailer, but its 2.5m beam keeps it a legal size as long as you have a suitable weight capacity tow vehicle. Even with the factory aluminium trailer, the weight will near 4000kg when loaded with fuel and fishing gear. Hence, it’s in upgraded LandCruiser territory or one of the American utes — the factory Hino 4x4 looks ideal.

At the time of our review, model branding was in the transition from imperial lengths to metric. So although you might notice the 2800 badges on the side of the boat in our photos here, the boat on show is the latest 7700 Sports Sedan with an extensive list of fishing and cruising options.

As the name suggests, the 7700 is 7.7m long, but a relatively high freeboard and towering hardtop disguises the boat’s length somewhat at first sight. Starting with sharp entries at the bows, the hull shapes flow back with a moderate flare with stepped chines around the waterline for lift. A slight step down amidships breaks the almost straight sheer line back to a reverse transom and 300mm pods for the twin engines. Suzuki is standard power from the factory, but the owner had chosen Mercury 200 FourStrokes for our test boat. Recommended power is between 150–200hp twins.

Topside, we see the bow rising gradually over the forward cabin to the raked split windows of the high hardtop for a visual effect that suggests refinement but with a hint of aggression. From go to out the door, construction is a 12-week process. The boat is formed from three moulds for the hull, deck and hardtop, which are then permanently bonded together for a stiff and robust entity. The hull and deck are hand laid multi axial woven mat with chopper gun reinforcing the solid glass layup. 10 per cent of customers, including our review boat’s owner, opt for foam filling of hulls.

The cabin uses foam sandwich construction for optimum weight distribution, but with ample strength for heavy items up top. After a month with the glasswork, each boat goes through a meticulous fitout, including the increasingly complex electronics installation before undergoing an individual water test.

When I visited the factory after the review, it was evident the owners of Powercat Marine, Grant and Melissa Oliver, pride themselves on the amount of customisation that goes into many of the boats they launch. Both the 7000 and 9000 series attract owners who aren’t new to boating and expect a boat to suit their individual needs. So, following that trend, the 7700 on review has been set up for fishing

and cruising with the option of camping on board overnight.

Options include a list of modern electronics and roof-mounted solar panels to charge a pair of 120Ah batteries through an Enerdrive ePRO smart charger and battery management system. So with 80L of freshwater, there should be ample self-sufficiency while at sea, along with power for refrigeration to keep the catch fresh.

Over seven metres of length give the 7700 plenty of room to move. A central walkway between the engines has a ladder for access from a swim or into the boat when it’s on a trailer. It’s also a perfect spot when keeping a big fish clear of the props because this boat will spend most of its life wetting a line on the hundreds of reefs around the Whitsundays. To port is a side door for boarding from a dock.

Offering a great sense of security in rough weather, 1.07m high side decks with padded coamings surround the cockpit, which is clad in bare feet friendly Sea Deck. Down the back, each corner has live bait tanks, a bait table and stainless steel rod racks, while at floor level, large scuppers take advantage of the 180mm of positive freeboard to quickly drain any water that comes aboard from spray or rain.

A central fibreglass esky is large enough for decent pelagics, and is high enough to serve as a handy seat. Side lockers for lines, fenders and gaffs will keep the deck clear but be right there when needed. Removable seating at the corners and along the sides turns the cockpit into a dinette around the central esky and clear away for fishing.

Head height under the hardtop is around 1.9m, so it’s a bit of a stretch to the six-slot rocket launcher, but it means the undercover area has a bright, roomy feeling. A moulded cabinet to port incorporates a stainless steel sink and a 45L compressor fridge as well as the mate’s chair.

Steps and grab rails on each side help access the bow where a Magnet Anchor rests on a short bowsprit. Entry to the forward cabin is via a moulded sliding door to port of the helm, and once you step down, there’s standing room at the entryway. The cabin has a large berth and is neatly lined with grey frontrunner walls and an off white vinyl ceiling. There are no side windows, but a large roof hatch keeps things nice and bright. Side pockets help with storage, and a marine toilet is located under a portside seat.

The skipper gets a flip-up bolster seat and a footrest, so getting comfortable at the helm is straightforward. Even with large window mullions in the corners, vision is superb all around, and a pair of wipers help keep the screen clear on windy days. Meanwhile, the twin throttle controls, the Optimus joystick and a small diameter rubber grip wheel are well-positioned for a comfortable drive from either a standing or seated position. For tropical days, side windows and two roof hatches open to keep things cool.

Engine readouts are combined in a single screen at the top of the dash, while a panel for the SeaWays autopilot is alongside. Lower down are 9in and 10in Raymarine Aximum Pro RVX screens for Sounder (with a 1kW CHIRP transducer) and GPS. Finally, a shelf with a VHF radio, a Fusion sound system, and controls for the lights and pumps is to the left, with several tackle drawers below. A steady 15kt wind blew for our review, and combined with swirling water of the tidal rips between the islands to give us a pretty good idea of why these boats are considered such great performers.

Handling, ride and power from the twin Mercury 200s were all extremely impressive. The twin V6 engines blasted the hulls out of the water, and we quickly settled into a 23kt cruise at 3500rpm, consuming just 43.8L/h. At that speed, with the upgraded 250L twin tanks, you should expect a range of 241NM (446km).

The mid-range performance was stunning. From cruise, we accelerated to over 40kt at full noise, and the boat was a joy to drive. As with all cats, it takes a bit of getting used to the outward lean in turns but trimming down on the outside leg helps a lot.

Modern four-strokes are very reliable, but just for fun, we managed 26kt on a single engine, showing how buoyant and easily driven the 7700 hull is.

One of the standout fishing options on the boat was the SeaStar Optimus Joystick Control with Spotlock. Tides in the north of the continent are notoriously big, so keeping a position with the twin engines idling away

and locked into the GPS coordinates is a

As a trailer boat, a 7700 Powercat is a big commitment. It’s a large boat with a commanding presence on the road, so you need a decent tow vehicle and confidence to move it around. But the payoff is that it’s comfortable, roomy and capably seaworthy for chasing the fish or the sun along the coast. And, of course, it makes perfect sense at a mooring or dry stack.

Starting at just under $240k with twin 150hp engines and some basic electronics, it’s a lot of boat for the money. Of course, as tested with the full monty of upgrades, the cost blows out by over $90k, but that includes a $22k alloy trailer and the $35k Spotlock steering, so I’d still argue that’s good value for a vessel I’d happily spend weeks onboard fishing, diving and mucking around.

PROPELLER Counter rotating 16in x 17in