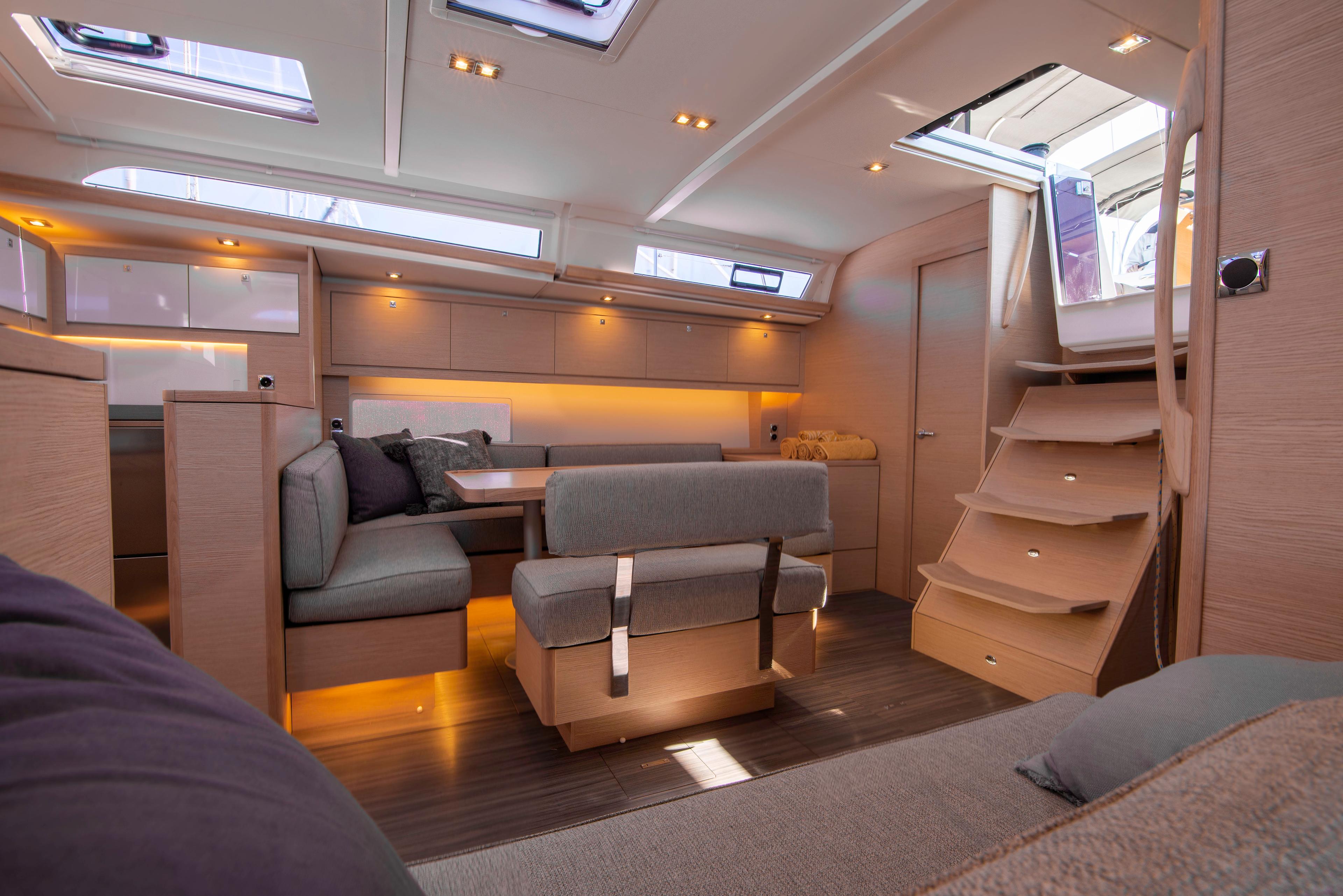 Hailing from La Rochelle, France’s renowned yacht building region, Dufour shares a birthplace with many world-renowned yacht manufacturers. One in particular saw an opportunity outside its typical buyers’ market to add value to the brand from their own experience and global success — embracing the DNA of Dufour’s sailing pedigree and injecting liveability enhancements and advanced construction techniques, the Dufour 470 is a serious player in the production monohull market. Dufour has been known in the last two decades for producing two lines — the cruising focused Grand Large line, and the racing focused Performance line. In recent years, the market has contracted in the racing area while expanding in the cruising and casual sailing market. There is demand for performance yachts, but buyers today have a focus that looks at the liveability and on anchor experience as seriously as the performance characteristics.

Since the 1960s, Dufour has taken an adaptive approach to the market, the first of the new breed revealed in 2020 continuing that versatility. This time three clear sailing types are catered to — Casual, Cruising and Racing. What’s different from before is they managed to do this from the one mould. The new 470, 530, and 61 all come in the three new offerings.

If they share the same hull, it begs the question of how they create a hull that offers solid stability for the casual sailing and possibly the charter market as well as satisfying the performance cruiser market?

The approach is a wide-body hull design with hard chines that’s lighter and more robust than in previous models. The hulls are now injection moulded, with a much better combination of resin and fibreglass, creating far less wasted fibreglass, a lighter weight, and higher strength. They are not the lightest yachts in the category, but they are built for longevity.

At 15ft 5in, the generous beam does not translate to a sticky, slow hull at all. A great deal of that beam is above the waterline, and there has been an effort to reduce the wetted surface area in other ways — lifting the transom out of the water has reduced the wetted surface, as has the use of hard chines, which also reduce the angle of the heel and improve stability.

It feels like a balanced sailing experience with more tolerance during gusts. The advantage of the hard-chine design is that it increases the buoyancy right at the location point of the heeling. The single rudder remained immersed in clear water forward with less chance of exposing itself and losing grip in the disturbed water near the transom. As the wind increased and the load on the single rudder increased, it held firm. The yacht is way less inclined to round up and is way more lenient on the helm when the gusts come along, which allowed us to get away from having to reduce the sail area. The directional lines of the pronounced chine also offer a better tracking experience.

They’ve done an excellent job of building a platform that is very forgiving to sudden gusts, which keeps the adrenaline levels down in the Easy Package, while allowing the Performance Package to carry more sail further up the wind range for consistently faster speeds. Above the gunnels is where you see the differences between the three 470s — the main ones are in sail control and sail configuration. Recognising that not everyone wants to explore beyond the horizon, Dufour created the Easy Package, which keeps it simple and easy to do short-handed, with little impact on the cockpit by the sailing. It’s configured for people who like sailing but don’t have to do it in a hurry or flurry. They’ve named it the Easy Package for a reason, as in-mast furling and a self-tacking jib on a track will mean you’ll get out more often with less reliance on others — a perfect way to share or introduce sailing to novice crew.

Today’s test yacht is Ocean Package. If the easy package is almost like sailing an automatic, the ocean package is like sailing a manual SUV with some low down grunt. Dividing sailing roles into three stations gives the coastal and ocean cruising market more control and options. Instead of running it all back to the helm as in the Easy Package, the Ocean Package splits it with lines running back to either side of the companionway. Mounted on either side of the companion are T50 winches. One powered winch helps with the halyards reefing lines and operating the German Mainsheet system running on a traveller forward of the dodger. On each side of the cockpit are two more sets of winches, one controllable in front of the helm and one from the helm position.

Upping the sail choices on the test boat are genoa tracks and cars with deck hardware to run the asymmetrical spinnaker. Once you step up to the performance package, you’re getting something pretty slick looking. The sleek exterior design adds the back anodised aluminium mast, boom, standing rigging, running back-stay and stanchions, plus a composite wheel at each helm. For performance, larger powered winches for the Genoa and Spinnaker sheets deal better with the increased loads, and a single point mounts the main sheet on the cockpit floor in place of the cockpit table on the ocean version. Sails are upgradable too, and the incremental performance enhancements can put your nose in front when it counts and your feet up in style when you’re there.

The sails were raised as we cleared the channel out from Royal Queensland Yacht Squadron and headed into Moreton Bay. The wind’s start off around 12–14 knots. We awaken the main from the lazy bag that houses it, and we unfurl the self-tacking jib. The sheets and halyards, all getting a stretch as we tune the sails and settle into our first run, about 40 degrees off the wind.

The single rudder set forward of the well-rockered transom, combined with the mast positioning and the keel, resulting in impressive tracking, and the heel is consistently stable. Gusting to around 16–18 knot range, what stood out was it maintained composure and didn’t feel overpowered and even without the complete tune-up, we were sailing in the 6.5–7.5 knot range with ease.

The simple angled pedestal helms have most of the instrumentation on the starboard helm, a central chart plotter installed below the cockpit table and is viewable from both helms. A gap between the two biminis gives a good view of the main from the helm, but it also provides welcome headspace to pass through to the side deck from the cockpit. Flush skylights and deck hatches make moving forward on the expansive side decks uncomplicated. The uncluttered space at the bow for anchoring duties also conceals a huge storage locker for the deflated tender, outboard and more. The decent deck beam forward provides a usable space to throw up a shade at anchor and enjoy the breeze on the foredeck.

When it’s time to drop the hook, the new design from Dufour has another personality and effortlessly transforms into the holiday unit over the water. Over on the port helm, there are two subtle buttons and four drink holders. Once at anchor, you realise what they are for — and it’s not a couple of light switches and provision for an exceptionally thirsty port helm’s person. The buttons raise and lower the swim platform, the port transom seat lifts provide wide-open access. Lifting the middle transom seat forward reveals the outdoor cooking station with a barbeque hot plate, bench space and sink for potentially one of the shortest hook to cook journeys your fresh catch could have. Dufour has worked out that the port helm is the most social position of the cockpit. It catches the breeze and connects with the transom, the cockpit and the side decks forward, and that’s why it deserves so many drinks holders.

The large cockpit table seats eight to ten people. Even with just the starboard side of the table raised, there’s dining space for at least four people with casual seating opposite and unobstructed access down below. Central drink holders, an ice chest in the centre of the table for entertaining and a weather-sealed USB charging point below the table complete the modern cockpit setup.

The beam of the boat is striking as you go below. To starboard, the four-sided dining booth doesn’t impede past the centre line leaving an open flat floor space that suits casual moving about an entertaining area that is much more open and usable with the reduction of obstructions. A casual two-person settee/lounge to port creates a spacious open plan feel with a great sightline to the water through the hull window, plus it’s a great companion lounge to the galley. The breath of fresh air in the design below is the galley forward, effectively spanning the entire beam forward of the saloon. What this creates is tranquillity for the galley. It’s gone from typically being the busiest intersection of the boat to having only one thoroughfare to the owner’s cabin forward. The cabin door forward splits the galley into two sides, cooking and washing up to port and a food prep and drinks station to starboard. Equipment on the port side includes a gas cooktop and oven on a gimbal and a deep sink. To starboard, multifunction fridge/freezer drawers, wine bottle storage and plenty of overhead locker storage allow the sorting, prepping and entertaining duties to happen away from the hot and wet side of the galley.

Carrying the volume forward above the waterline of the main cabin creates a very liveable arrangement, with a separate toilet to starboard just inside the cabin door and a separate shower to port. In between and drenched in natural light is a very lovely king-sized island berth with enough space on either side to have an easy time getting in and out of bed. Much like the saloon, many facets of the cabin benefit from the light and airy feel from the glazed overhead deck skylights, two opening deck hatches and hull windows perfect for looking out from the bed. The light, wood cabinetry mixed with white panelling creates a remarkably open and immersive connection with the sky above and the water below.

Guest accommodations are identical cabins port and starboard aft of the saloon, except for some headroom in the starboard cabin over the bed. On the port side, they share the second bathroom with a separate shower. The size is good, and the storage is decent for long term usage. This layout makes the most of the liveability below, but there are more options for more cabins and different configurations to suit all sorts of uses.

The Dufour 470 is a solid platform to offer three sailing options and multiple configurations below. Under the Fountaine Pajot umbrella, the brand is flourishing internationally and domestically. There is such confidence in the brand that the Australiasian Dealers Yacht Sales Co (the sister company of Multihull Solutions) has secured 17 yachts for delivery in 2022 and 2023. Nine of these are Dufour 470s. Brand manager for the region Bob Vinks knows owners of Dufour yachts will benefit from the vast network of support available through the long-established network built over the years by Fountaine Pajot’s dealers in Australasia.

Expect to see more Dufour in the future.