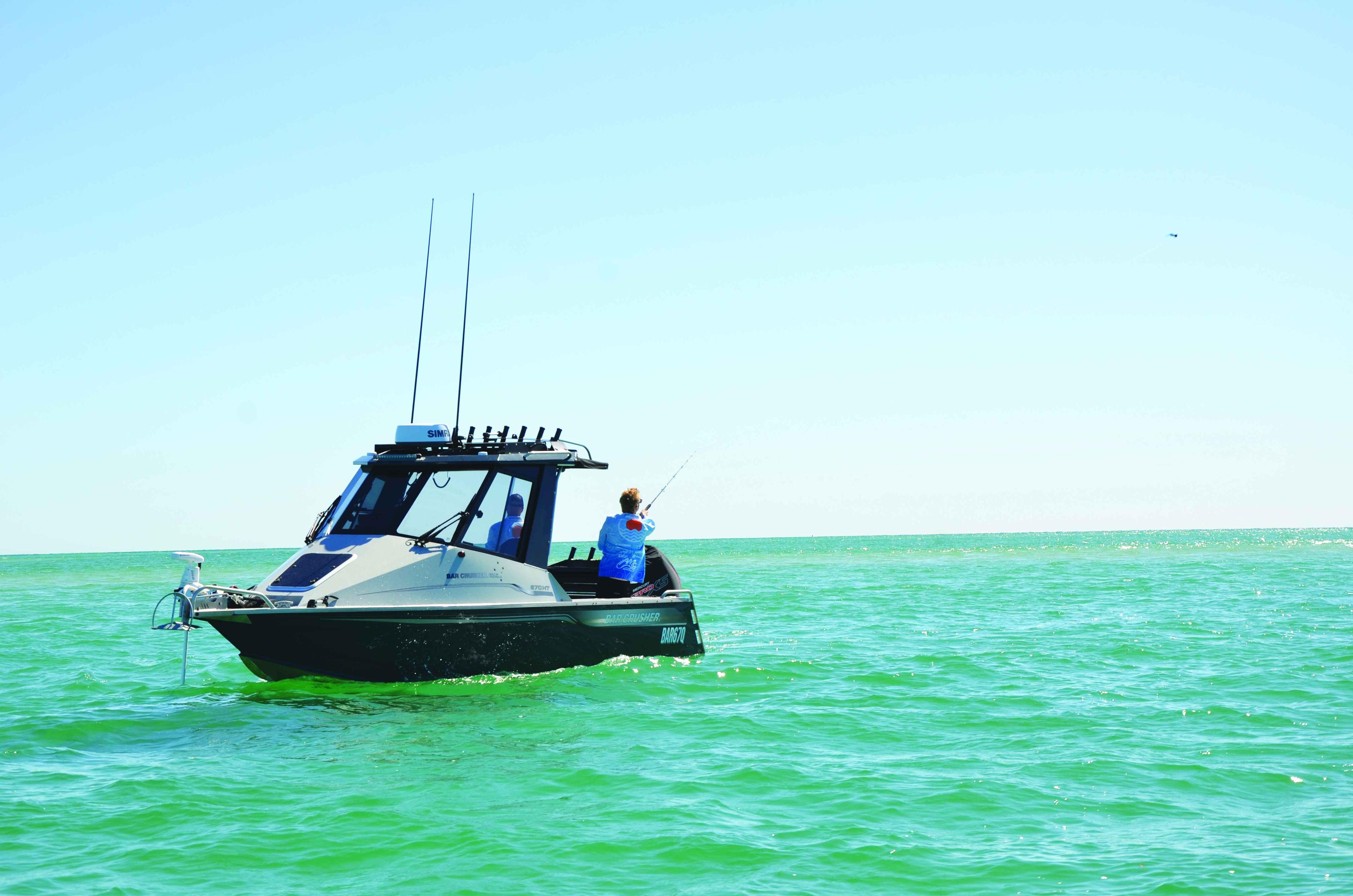 Bar Crusher, an Aussie plate boat icon that needs no introduction to the marine industry. We’ve tested and thrashed them through their paces over the years and they have stood up to their reputation as ocean weapons that showcase tough build quality, combined with advanced innovation and superb performance.

Local Queensland dealer, Australian Marine Centre, have been around for a long time and when it comes to plate boats, well, it’s not surprising that the Bar Crushers are one of their top sellers. We took a look at AMC owner, Rod Elliot’s, latest 670HT, and how he’s tricked it up to suit some serious offshore fishing and family boating, as well as reviewing the new upgrades since testing the 670HT in 2012.

Reminiscing back to 2012, I remember the Bar Crusher 670HT getting the thrashing of its life at Australia’s Greatest Trailerboats, taking out the title as the best aluminium boat in the competition, and rightfully so. As they always say, don’t fix it if it isn’t broken and over the past nine years, the high-performance hull needed no changes, however, the 670HT has undergone a number of other innovative mods that have most certainly taken it to the next level.

On offer you have the original 6.7m of heavy-duty plate alloy that’s designed to destroy the ocean in all aspects. Sporting a combination of rigid and symmetrical lines, the modern military styled aesthetics most certainly portray a hardcore and easily recognisable look that I like, and over time, a look that will never date in my opinion. A look at the latest 670HT, well, at a glance, its quite deceiving as the new mods and upgrades are not instant eye catchers, however, when you take a closer look, they are significant and as mentioned earlier, take the 670HT to next level.

The 670HT offers a starboard entry walk-through transom, leading to a spacious and open cockpit to suit the serious fisherman. I liked the false-transom setup with executive bait-board and tackle drawers, the raised battery compartment, a simple but practical fold-away rear bench, the clear-view port side live-well, and oversized coamings that run plumb to the sizeable side-pockets below. The new 45-degree chamfer to the inside edge of coaming also makes a huge difference to comfort when leaning or resting up against the side.

One thing I did notice was no kill-tank built into the deck. General consensus ruled for it to be removed to allow for a larger volume fuel tank (now 230L instead of the originally 190L), as well as allowing for a rear filler. The loss of the kill-tank is a small compromise, however, the captain and passenger seating allows for large esky storage below, so that takes care of the fish. There's also plenty of cockpit deck room to add more if need be.

The 670HT’s open cab is nicely balanced, providing ample shelter from the elements and without impacting on the cockpits fishability. The tinted glass definitely keeps the cab cooler, along with the high glass screens and side windows creating unrestricted visibility at the helm. The port and starboard wipers are a bonus to have, and I do like the split centre screen opening up for extra ventilation.

Other upgrades included a redesigned dash with more of a vertical angle to prevent sun reflection off nav/sonar screens, as well as being viewable from the stern. The dash is spacious and, in this case, the owner tricked his 670HT up with 25 grand worth of high-end Simrad gear; Simrad NSS Evo 3 16 inch as the main chart-plotter screen, along with a Simrad NSS Evo 3 12 inch for sonar with 1kW transducer. The dash is also set up with a lower panel for all other accessory switches, the binnacle control, and trim tab switch.

The hard-top has also had a few tweaks done for the better and includes the new spoiler design, new rocket launchers, better water drainage , matching paint colours to hulls, and a nice overhead console upgrade which allows for multiple radio installs, stereo systems, and speakers — I like it as it frees up so much extra space on the dash.

The open cab then includes a fair-sized v-bunk with storage below, nice wide internal side-pockets for storage, good rear access to the electronics and mechanicals, as well as a forward glass hatch that adds light, extra ventilation and access to the bow for those not prepared to walk the gunwale. The cab is not huge by any means, however, is well-proportioned, and sufficient enough for a kip or even the odd little overnighter. Only thing I would do, is definitely add optional carpet or a SeaDeck lining to the exposed ally, and that’s to reduce the water slap noise.

Up in the bow, the 670HT boasts a new bow-sprit, along with all bow and grab-rail diameters increased to 32mm for better grip. The owner opted for an exposed windlass anchor system and top of the range Minn Kota Ulterra electric motor. It’s an 80LB thrust/24V/72-inch shaft electric, and it has the self-deploy and retrieve function — a must for this style of boat. Sparing no expenses, he also opted for the latest BLA lithium 24V high-amp hour battery and charge system. The battery alone costs around $3000, however, before you choke, you need to consider that these batteries have a far longer life span, potentially double of the standard deep cycle batteries. They also weigh far less, in fact, 35kg versus my dual 130Ah weighing in at nearly 80kg. The lithium’s are a fast charge battery, have longer run times and a plethora of other really good features. Do the maths, two decent quality 12V high-amp batteries can cost up to 800 bucks each, with a decent lifespan of around three years before dropping power. The marine lithium’s are said to last double or more, so if you take the cost of purchasing two sets of standards over six years, versus one lithium … well I’m definitely considering going the lithium route. The new Minn Kota’s are game changes and I’m seeing them on so many bigger boats now. Having the ability to spot lock without anchoring is such a bonus, rather than anchoring. Controlling drifts to suit current can also be done, as well as stealth mode slow trolls. For those with bigger and heavier boats, Minn Kota also do the 36V (112LB) 72-inch shaft.

We have done our time on this hull and know just how well it performed when winning Australia’s Greatest Trailerboats 2012, in the aluminium category. This time it’s all about the new Mercury Pro XS V8 200hp V8 sitting on the transom. Every time I test one of these new Mercs, I walk away more and more impressed. Aside from being modern in design, this is a V8 outboard that weighs in at a ridiculously low 229kg — it amazes me how they do it.

The lightweight TorqueMaster Gearcase (featured on select V8 models) has a 1.75:1 gear ratio and a robust 1.25-inch-diameter prop shaft designed for semi-surfacing, high-speed applications. I can only imagine what this thing could do on a bass boat. They also have Adaptive Speed Control that maintains a desired rpm regardless of changes in load or conditions without adjustments to the throttle lever position, as well as Transient Spark Technology which electronically adjusts the ignition timing of the engine as needed for added torque and quicker hole-shot. Adding to the bling of the V8, the performance-tuned exhaust sounds pretty ‘grunty’ on the water but is still relatively quiet considering.

Knocking, or more like gently tapping, the smooth digital throttle down, the hole-shot from this beast is most certainly a smile producer — man, its nippy and cracks you onto the plane fast. The optimum cruise speed is around 3500rpm, producing 25 knots speed and an economy of 27.6L/h. A lighting burst to wide open throttle then gets you a healthy 42.4 knots at 5600rpm and an economy of 69.8L/h, which is quite good considering. Clearly, these V8’s run better at higher speeds.

Off the throttles, the 670HT settles into a mellow slow troll speed at 1000rpm/4.5kt/4.8L/h. Those chasing higher troll speeds, 2000rpm puts you at 7.6 knots, and economy at 13L/h. At rest, the floodable ballast fills and locks the hull onto the ocean surface like a magnet — it really works and exceptionally well at that. These systems are quite an intricate design, where the water holds firm in the ballast to produce above average stability, but also drains fast when accelerating. You also have the option of closing or blanking the ballast to suit.

The 670HT’s sharp entry deadrise to 20 degrees at the transom is no doubt a winner in the chop and swell. Punching through the chop and swell on the South Passage bar at medium to high speed was an absolute breeze. I’m all for soft riding boats and this is most certainly one of them. Like all boats, there’s always a bit of compromise involved and the 670HT does throw a touch of spray every now and then from the chop, however, a small price to pay for such a good ride. If you wanted to save a bit on the end dollar figure, the Mercury 200hp V6 would be a good fit, and I reckon it would be a decent performer as well.

Bar Crusher’s 670HT has once again ticked the boxes in all aspects. The new innovative features added since 2012 are all a win and once again, take this boat to the next level. It’s a dedicated fishing weapon and the kind of boat that many fisho’s would dream of. The classic ride and handling characteristics make this hull a pleasure to drive and when it comes to long distance runs to the reef or islands, well, iit’s going to get you there comfortably and safely.

Entry level pricing starts from $109k and the as tested price with all the bells and whistles comes in at $170k. The owner threw some expensive gear at this Bar Crusher, however, $170k is not bad value for money at all considering the upgraded outboard, the size of the boat, all the fancy gadgets, numerous inclusions, hardcore  build quality, and suitability to serious offshore fishing.

Want to check out some Bar Crusher boats for sale? Take a look here.