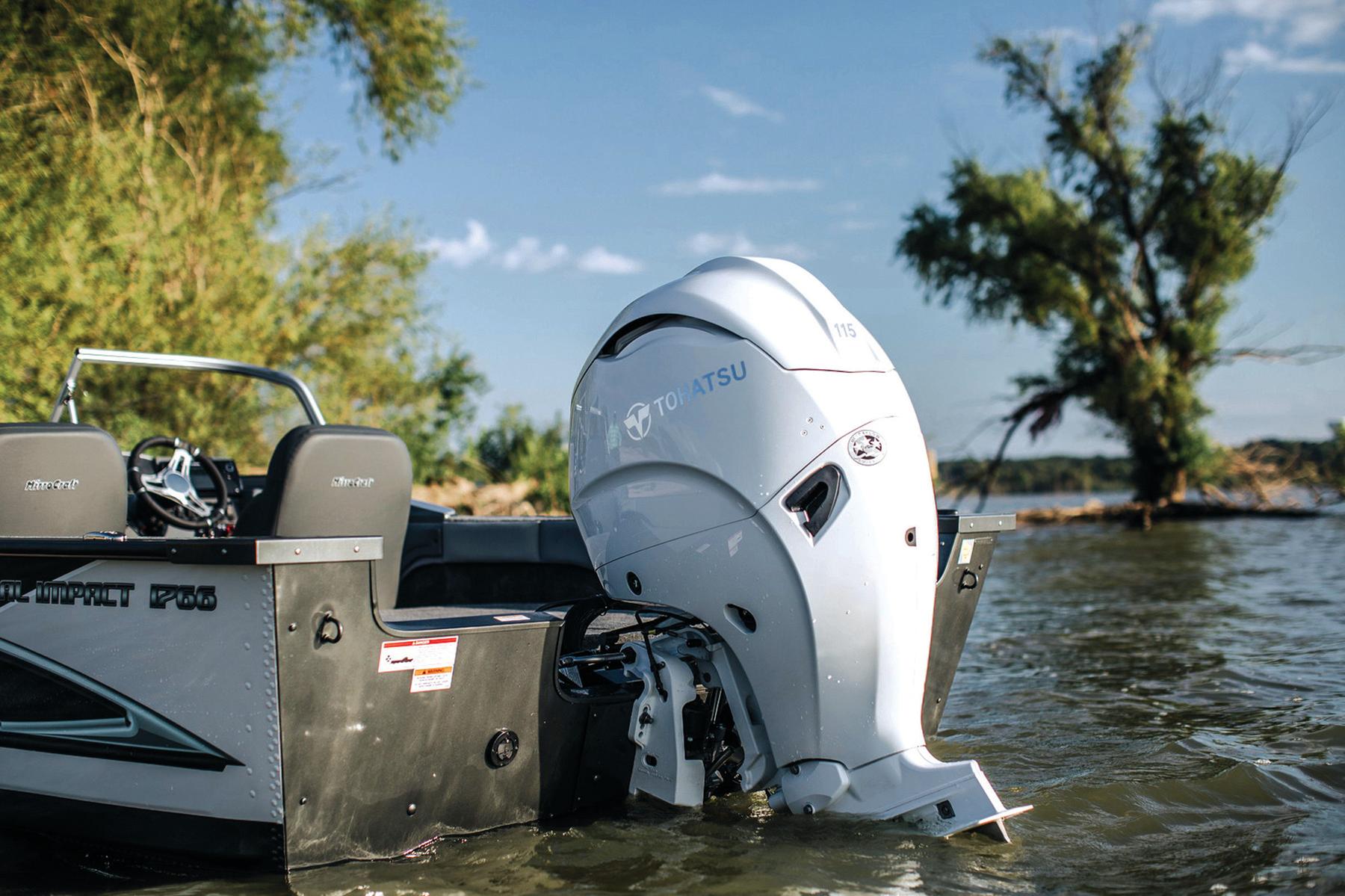 As the MFS 115A is the last four-stroke 115 on the world market, Tohatsu came up with a power head design that’s different from the competition. Other Japanese outboard manufacturers opted for double overhead camshafts with four valves per cylinder.

But Tohatsu reasoned that a DOHC design was unnecessary and just added weight, whereas a single overhead camshaft operating four valves per cylinder would be lighter but still enable the engine to ‘breathe’ freely in its upper rpm range. Two valves per cylinder are fine for low speed to mid-range rpm, but literally suffocate for lack of air at or approaching Wide Open Throttle. The engine has to work very hard to reach WOT necessitating the engine management system pouring in more fuel to get there. For example, a 115 having two valves per cylinder may use 45L/h at WOT, whereas the MFS 115A uses 42L/h.

Using a SOHC design also allows for simpler valve clearance adjustment. The DOHC engines have what's known as ‘direct acting’ camshaft lobes which connect directly to the valves. To adjust valve clearance, the camshafts must to be removed in order to check the shims used to get the required clearance, whereas SOHC requires just a spanner and feeler gauge — much easier and cheaper for boat owners.

Tohatsu has always been big on discussing torque output, whereas other manufacturers tend to be coy about supplying this information. Where most four-stroke 115S develop maximum torque at 4500rpm, the MFS 115A develops it at 4200rpm with 97 per cent of peak output still available at only 3000rpm. This gives crisp hole shots and the ability to hold a clean plane into head seas without using more throttle opening.

According to figures supplied by Tohatsu Corporation for the MFS 115A and the direct competition the MFS 115A develops the second highest torque output after the 2.4L Honda BF115, which is 22 per cent heavier. The other similar-displacement Japanese DOHC engines develop substantially less torque with only the SOHC two valves per cylinder US competition (slightly bigger displacement) coming close.

Opting for four valves per cylinder is only part of the story. The alloy intake manifold —  unlike resin in some of the competition — has equal length runners to eliminate any differences in air intake flow. Then there's the 4-2-1 exhaust system. The length of the exhaust passage is equal for each cylinder and the exhaust gases from cylinders one and four combine into one outlet, as do the gases from cylinders two and three.

By merging these outlets into one exhaust, scavenging is created while maintaining the initial back pressure at the exhaust valves that all four-stroke engines need. The exhaust valve clearance is slightly higher than the intake valves but, like DOHC engines, the spark plugs are located centrally in the cylinder head in the middle of the four valves. The narrower valve angle in the SOHC engine than in DOHC engines provides better bottom end torque.

However, I question Tohatsu’s logic in having the sump oil pump driven by the camshaft belt. I know that belt drives are normally very reliable — providing they're replaced at specified servicing intervals — but the belt would need to be checked regularly for any fraying or tears as not only would oil pressure fail if the belt breaks, but the engine is an ‘interference’ design where belt breakage would lead to valves contacting piston crowns.

At least the sump capacity is large for a two litre engine which would help to absorb any oil dilution that occurs when a four stroke is run at trolling rpm for extended periods. Oil changes are done by unscrewing a bolt in the leg, while the canister oil filter is easily reached. Tohatsu recommends using only an FCW, or Four Cycle Water cooled, SAE 10W30 oil for temperate climates and an SAE 10W40 oil for tropical conditions, with oil and filter changes every 100 running hours or six months. A task easily performed by owners.

The voltage regulated alternator has the same output as the DFI two stroke MD 115A, but the engine control unit (ECU) doesn't draw anywhere near as much current as the TLDI engines. Tohatsu states that a 70Ah 512CCA (cold cranking amps) battery is needed instead of the 105Ah deep cycle unit needed for the MD 115A. The weight saving alone wipes out the eight percent heavier bulk of the MFS 115A over the MD 115A. The alternator regulator is fully water cooled for reliability and still produces 32A at only 1500rpm.

As with the MD 115A an analogue tachometer is supplied that includes a digital hour meter and Tohatsu's clever trouble shooting system that uses a combination of three lights across the bottom of the tacho that light or don't light according to one of 28 possible faults. If a fault such as high water temperature or low oil pressure occurs the engine rpm will be progressively reduced to just above idle speed. This eliminates the need for a laptop computer and suitable software to analyse any running issues.

The MDS 115A also has the Tohatsu Outboard Communication System (TOCS) that can connect to multi-function Garmin instrumentation that shows rpm, speed over ground, real time fuel flow and range to empty and other engine running parameters such as water temperature in the cooling passages. The MFS 115A also has the same trolling rpm variation as the MD 115A, achieved by pushing in the ignition key for one second at a time. The rpm varies between 650 and 850.

The fuel system has the normal EFI vapour separator plus the water-separating fuel filter with drain that first appeared on Tohatsu's EFI MFS 20E outboard in 2017.

Other changes over the MD 115A include a deeper gear ratio, larger gear case and anti-ventilation plate for improved ventilation in tight turns, plus a 20 per cent increase in available water flow from the impeller.

The recreational-usage warranty is three years plus a further two if the engine is serviced by an authorised Tohatsu dealer.

On firing up the demo engine the first thing that surprised me was the quietness at trolling and low speeds. The engine was 6.3 decibels quieter when trolling than the MD 115A I tested on the same hull a few weeks earlier. When planing the difference was a whopping 10.5dB and even at WOT the MFS 115A was 2.3dB quieter. The MFS 115A was 5dB quieter than the US competition at WOT too. And when the throttle was ‘floored’ from trolling rpm, we planed in three seconds flat! The ECU senses the rapid throttle opening and pours in more fuel to provide the hole shot performance. Still, for a four-stroke it was very impressive.

The excellent torque at midrange rpm enabled the demo engine to maintain rpm when punching into a 10–15kt nor'easter and 40cm waves on Lake Macquarie at 3500rpm. We didn't have to touch the throttle to maintain 18kt. Of course the ride of the Highfield RIB in these conditions was soft and surprisingly dry, as who wants to get wet while conducting a boat test!

Through tight turns at 4500rpm there was absolutely no prop ventilation nor did the rpm diminish as the ECU simply injected more fuel to compensate for the additional engine load.

I'm really glad Lakeside Marine, importer of Tohatsu outboards, was able to supply both an MD 115A and MFS 115A on the same hull. It really showed how good DFI two strokes were compared with four-strokes with the main advantages of the latter being quieter operation, less vibration (those with copious flab need not worry about losing it) and of course not even an oil smell when backing upwind.

Tohatsu has done an excellent job of designing and engineering its first four stroke outboard over 100hp. Its low end and midrange grunt is excellent, and it has features that with regular maintenance show provide for a long and reliable service life.

For more on the MFS 115A visit tohatsu.com.au.