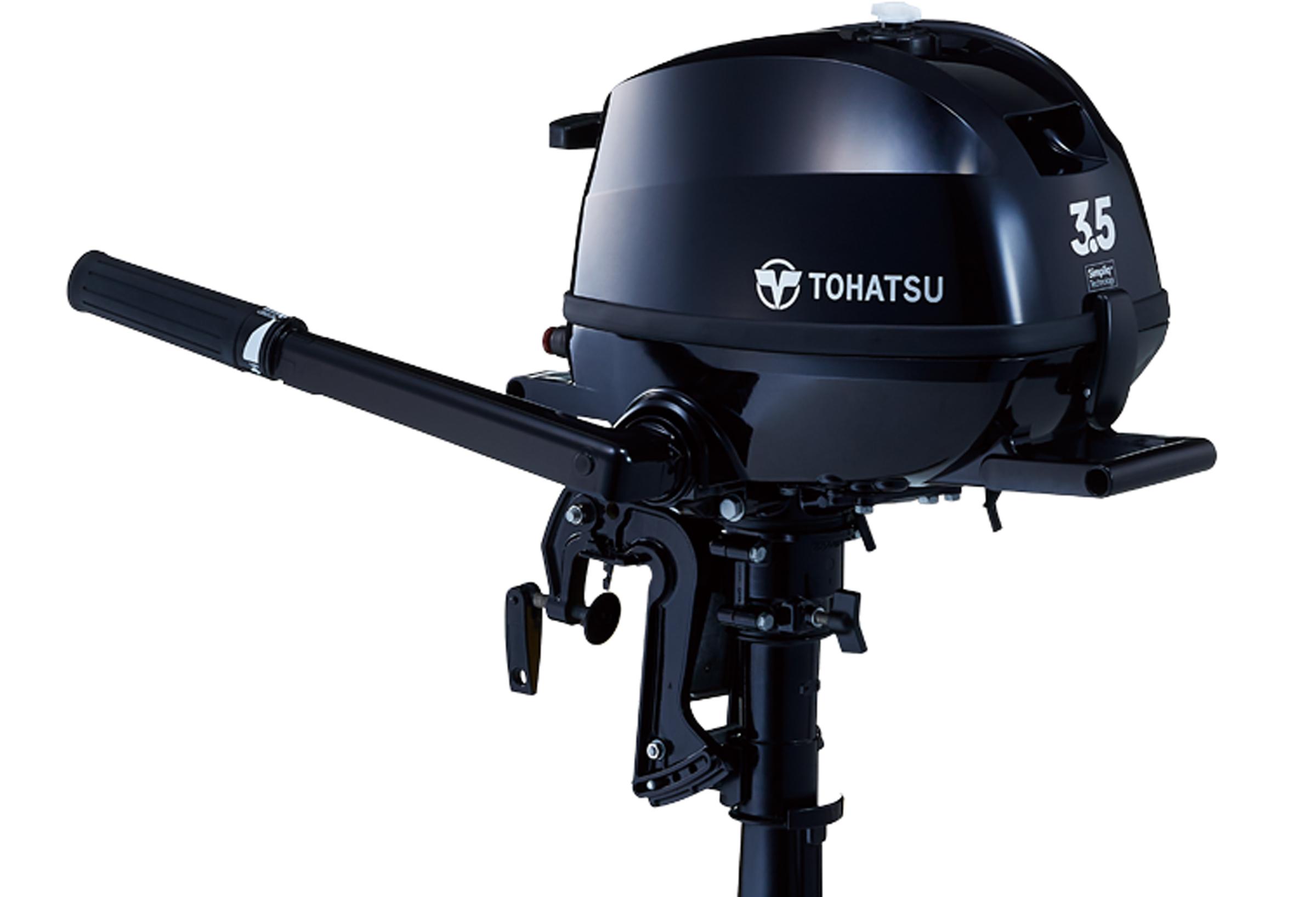 When Tohatsu released its MFS 3.5A in 2006, it was the most powerful four-stroke outboard under 4hp. The only omissions were carry handles, which were fitted to the Yamaha F2.5A (and its Chinese Aqualine F2.5 clone). Of course these engines had nowhere near the torque and power of the 3.5A, but their handles did make carrying them a simple, one-handed task.

The new 3.5C overcomes these issues by having handles front and rear, making installing the outboard on a transom so much easier.

Like the Yamaha (now the F2.5B model), the 3.5C is designed for transom heights to 16in or 406mm, though unlike the Yammie the 3.5C has an overall transom bracket to anti ventilation plate height of 16.8in or 427mm (the 3.5B had a 17.1in or 435mm leg), so the prop won't be too deeply immersed if the engine is used on a 15in transom. The Yammie and Aqualine meanwhile have a height of 17.3in or 440mm and drag is noticeable when the engine is mounted on a 15in transom.

Also, like the F2.5B, the 3.5C can be stored on either side or on its front without fear of sump oil flooding the cylinder.

The more angular cowl actually makes the motor look smaller than the fussy 3.5B cowl and a thick rubber sealing ring around the cowl bottom prevents scratching the lovely indigo paintwork, which is nice compared to black.

What really separates the 3.5C from the competition is that it has electronic ignition timing advance, from three to 25 degrees before top dead centre. The Yamaha and Aqualine have fixed timing of around 20 degrees that prevents low speed trolling. Both idle at 2000rpm in neutral or around 1600rpm in gear, meaning their trolling speeds are quite high, whereas the 3.5C trolls as low as 1200rpm.

Having timing advance allows the 3.5C to operate on either 91 RON standard unleaded or 95 premium, the latter in my opinion a better fuel because of its longer shelf life and the fact it’s less likely to be tainted with ethanol. Using premium in fixed timing four-strokes can create pre-ignition because the octane is actually too high for the engines. This also applies to four-stroke lawnmowers and fixed-rpm portable generators.

Because there's no provision for shallow water drive, the 3.5C uses simple splash lubrication. Draining sump oil from the 3.5C is easy with a little elbow fitted and a plug unscrewed with a 10mm socket wrench (included in the toolkit supplied). A nice touch is the clearly visible oil level sight glass in the engine pan.

The lower unit of the 3.5C is much beefier than the Yammie and Aqualine, with an oil capacity of 180ml compared to 75. But these have a way larger zinc anode, whereas the small round unit of the 3.5C must be checked regularly if the outboard is mounted on a tender alongside a cruiser or yacht having copper anti fouling paint.

The 3.5C has a power head angled 15 degrees to port to allow for more space for the carbie to starboard. The choke is cross-linked with the throttle to reduce the possibility of flooding the engine on cold starting. Pulling the choke knob right out also opens the throttle slightly. The 3.5C also has a re-designed carbie air intake angled downwards to better inlet protection.

Spark plug access is excellent but removing the rocker cover to access the rocker gear to check valve clearance is at best finicky. This also applies to the Yammie and Aqualine but these have a split engine pan for full power head access, unlike the very strong engine pan of the 3.5C which is a solid plastic moulding. The narrow NGK spark plug used in the 3.5C allows for larger valves for better ‘breathing’ and more torque and power. Oddly, the exhaust valve opens more than the intake valve, whereas in the Yammie and Aqualine, which use a standard width spark plug, it's the same for intake and exhaust.

Unusually the 3.5C doesn't have air vents in the cowl to dissipate power head heat when the engine is stopped after a long run. The MFS 3.5B had water-separating vents, so carbie vapour lock from power head heat sink on hot days may be an issue. Intake air finds its way via the opening around the oil sump drain elbow but at least the carbie now has a water-shielding intake instead of just a gauze. However the fuel cock has been located further forward, so now fuel from the tank runs down to the cock then back up to the carbie which is just below the fuel tank. As there's no fuel pump, cold starting sure ain't easy.

Prop swapping is easy with the traditional cotter and shear pin layout and the 3.5C is available with a choice of three prop pitches from 4.3in to 7in. The latter is standard, but this has too coarse a pitch for most dinghies, though it would be perfect for transom-sterned canoes such as the 4.9m Coleman Scanoe. I tested one of these back in ‘82 and a Suzuki DT3.5 outboard reached 7kt at half throttle opening with two adults aboard, so the 7in ‘I7’ would be perfect. However for the conventional hulls I have the optional 5.7in ‘F6’ is the way to go.

Recommended servicing intervals are every 100 running hours, annually after the first 20 hours or three months. At both these services the valve clearance should be checked so I really pity the technicians doing this task!

The two hulls used for testing were my early-70s 3.35m Savage Gull tinny and flat bottomed 2003 Sea Jay 3.4 Punt. The 3.5C was the 14th outboard to be tested on the latter hull. Caltex premium 95 and Quicksilver SAE 10W30 oil were used for all the test runs.

Like the MFS 2.5B model I tested in 2015 the 3.5C needed plenty of pulls to cold-start if the carbie has been run dry but providing there was fuel in the carbie about four pulls are needed to fire it up. However, once started, the engine ran with low vibration levels and a clearly visible pilot water discharge.

The 3.5C develops considerably more torque and power than the 2.5B, with the Wide Open Throttle average on the Gull rising from 6.1kt and 5400rpm to 6.9kt and 6000rpm swinging the same F6 prop, though fuel consumption rose from 1.1–1.5L/h. The engine revved more freely on this hull than on the Sea Jay because it has a 16in transom allowing for less lower unit immersion and more prop slip.

On the Sea Jay vibration levels were a bit higher but when trolling the 3.5C returned comparable fuel efficiency to the 2.5B and due to its sealed engine cowl was significantly quieter. For example, providing the throttle opening was limited to half, averaging 2.7kt the 3.5C used a mere 0.35L/h.

But overall the 3.5C was substantially thirstier than the 2.5B, a reality of pushing planing-hulled tinnies at fast displacement speeds. At least with the 15in transom the 3.5C could be swung 180 degrees for reversing.

Over a four knot ‘loop’ including 10 per cent WOT operation the 3.5C averaged 0.55L/h, whereas on this hull and pushing a total of 290kg a Tohatsu MFS 6C averaged 0.52L/h because more time was spent planing. The 6C averaged 15.3kt at WOT compared to seven for the 3.5C, 2.2 times faster while using only 50 per cent more fuel.

Tohatsu has been clever in releasing an outboard that not only has plenty of grunt but complete with fuel and oil weighs less than 20kg.

The large fore and aft carry handles actually make the 3.5C easier to carry than any of the competition under 4 hp.

With the maximum power allowed on recreational boats in NSW and Victoria without needing a driver's licence being limited to 4hp, the 3.5C makes good sense. There's simply no point in fitting enough power to provide fuel-hungry semi-planing speeds on tinnies when the 3.5C does such a good job on hulls to 3.5m.

Not only that, a four-stroke Tohatsu four is 7.2kg heavier and costs $325 more.

Fitted with the 4.3in pitch prop the 3.5C would make an ideal trolling or back-up engine on older aluminium runabouts such as the 4m Quintrex Breezeabout or 4.27m Fishabout, that may be powered by a carbie two-stroke outboard that's unsuitable for trolling.

Both of these hulls had dedicated auxiliary outboard mounts for long shaft outboards. Another runabout that would take the 3.5C is the 4.3m Clark Navigator and, because of its full width transom, well I'd say only a short shaft engine would be needed.

For the location of your nearest dealer visit tohatsu.com.au.