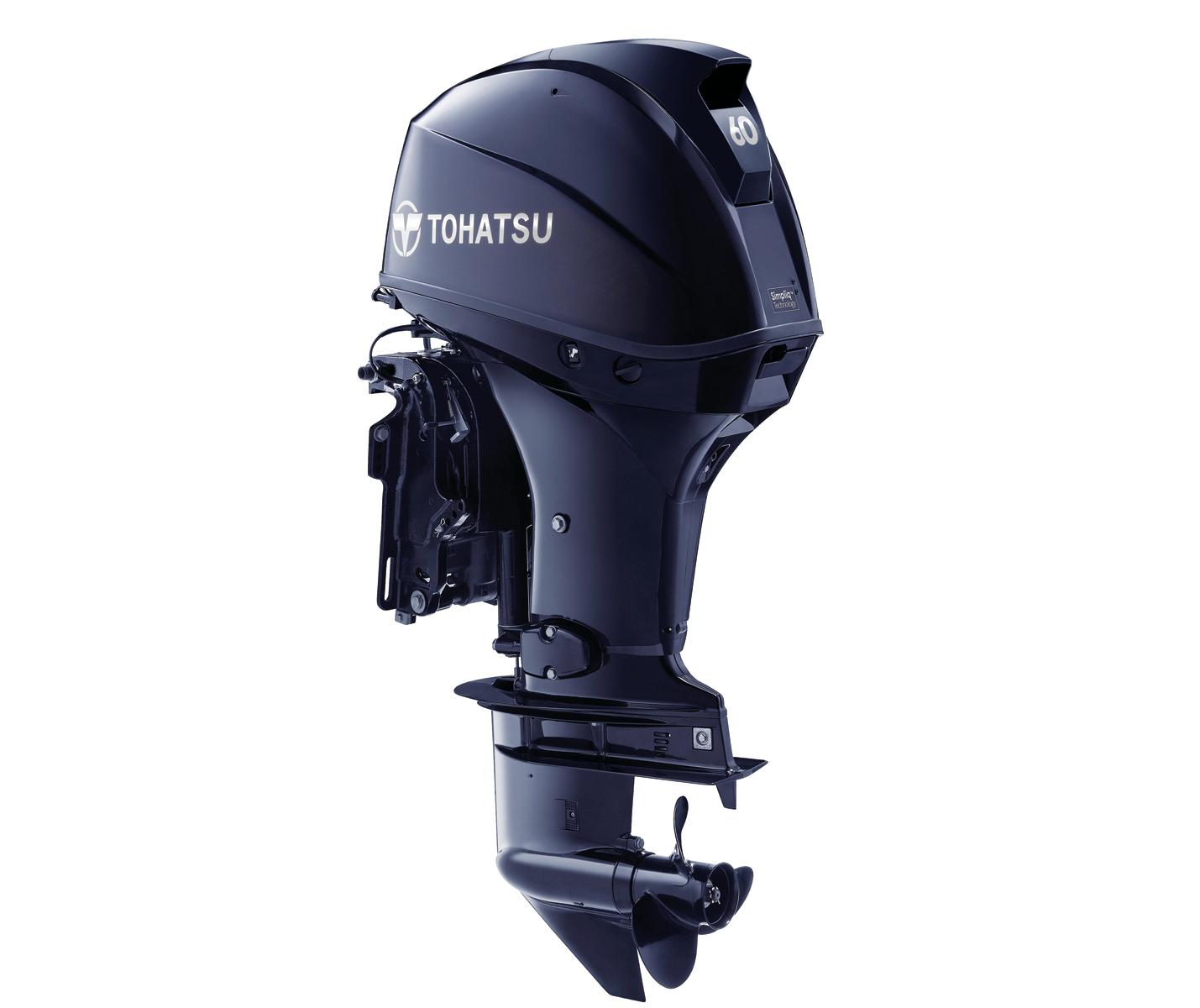 The lightest four-stroke 60 on the Aussie market

When Tohatsu released its MFS 50A it was one of the lightest outboards in its power range. But its homegrown 60 is a mere 1.5kg heavier and a whopping 11.5kg lighter than the Honda-sourced BFT 60A that it has replaced. In fact, the MFS 60A is only 6kg heavier than the old 798cc twin cylinder, oil-injected carbie two-stroke Suzuki DT60C from 1983, an incredible achievement for a fuel-injected three-cylinder four-stroke 60.

Yet the way Tohatsu achieved the 9.8 brake horsepower (bhp) increase from the same displacement MFS 50A was surprisingly simple. Even more incredible is that the MFS 60A outperforms its much bigger displacement four-cylinder four-stroke 60 competition.

When I questioned Lakeside Marine, importer of Tohatsu outboards, back in 2014 about a homegrown 60, the company was uncertain about whether or not the then new MFS 50A could be tweaked to become a 60. After all, a piston displacement of 866cc is fine for a 50 but a bit light for a 60, especially considering the three-cylinder Honda BF60 is 998cc and the four-cylinder Yamaha F60C 995cc.

But Tohatsu was very clever in the way it designed its 60. It didn't increase piston displacement but increased airflow to the cylinders, actually reducing the air intake manifold volume. The result was faster flowing air. To assist faster flow the throttle body butterfly valve was made thinner for less air disturbance.

Two valves per cylinder weren't sufficient for this increased airflow so Tohatsu added another intake valve, while also raising the valve lift from 9–9.5mm. Rollers were added to the rocker arms driven by the single belt-driven overhead camshaft to reduce friction and component wear. The ‘squish’ area of the piston crowns was expanded to increase the compression ratio. All of these mods improve performance without having to opt for a lighter plastic intake manifold, which can distort if the engine overheats.

However, unlike the previous Honda-sourced Tohatsu BFT 60A, the oxygen sensor in the exhaust system was dropped because of reliability issues. An oxygen sensor measures the density of the burnt air/fuel mix and advances ignition timing when a higher-octane fuel such as 95 RON premium unleaded is used. So unlike the Honda engine there's really no point in using 95 RON when 91 can do a similar job. But 95 is a denser fuel, has a longer shelf life and you're less likely to find it tainted with ethanol than 91 standard unleaded.

In all other aspects the 60 is the same as its 50 counterpart. The gearbox and reduction ratio are the same, as is the 2.4L oil sump capacity. The voltage-regulated alternator produces up to 21A, four more than the Honda-sourced 60, but around 5A is used to run the engine management system and electronic fuel injection, which is sensibly still throttle body (single point) and not the heavier and more complex multi-point system used in most automotive engines.

Powerhead access is excellent, with the engine oil sump dipstick to starboard and filler cap to port, and the bowl-type fuel filter and canister oil filter are easily reached. Nice touches are the individual ignition coils and a protruding sump oil plug to drain engine oil without it dribbling down the leg. Tohatsu recommends using SAE 10W30 oil for all temperate climates, though a 10W40 oil would be better in tropical conditions.

Anodes are fitted under and above the anti-ventilation plate and are large enough to be effective.

Valve clearance adjustment when needed is done using a spanner and feeler gauge, not the complex bucket and shim system that requires camshaft removal in the direct valve actuation DOHC competition, which in my opinion is simply cost-cutting. Thankfully Tohatsu has followed the example of Honda and not its other Japanese competition.

Servicing intervals are every 100 running hours or annually after the first 20 hours or three months. However if I was doing a lot of trolling, I'd change the engine oil and filter every 50 hours or six months to prevent the dilution of sump oil from the combustion chamber gas piston ring blow-by. Fresh oil and a new filter are cheap insurance against engine wear issues down the track.

The 60 can be freshwater flushed without running the engine, but I recommend occasional flushing using muffs to wash away aluminium chloride deposits from around the cooling water impeller and thermostat.

The demo motor had clocked around eight hours before I tested it, so was not fully run in but sufficient to conduct limited Wide Open Throttle trials. Unfortunately due to fairly rough test conditions and noise from the alloy hull, I was unable to get accurate decibel or noise readings. I was amazed that the standard alloy prop suited the demo hull perfectly, rare when it comes to propping engines above 40hp.

The 60 started as quickly and easily as the 50 and had similar vibration levels from trolling out to WOT and, provided the anti-ventilation plate was kept immersed, power astern was good, useful for backing out of skinny water. It handled the fairly hefty Mad Dog 489 Brute centre console better than I expected and was able to plane the hull well under where maximum torque is developed. I've always believed that for good fuel efficiency planing, plus reduced engine loading and wear, an engine should plane a hull at revs below where maximum torque comes in, and the 60 planed us at 1000rpm below the torque peak. Even when cruising it was close to the maximum engine efficiency band.

What did surprise me was the overall performance of the engine. Way back in 2004 I tested an early fuel-injected Yamaha F60C on a Horizon Sea Breeze 4750 bow rider; swinging a 13 inch pitch alloy prop (for a 1.85:1 gear ratio) and pushing a total of 800kg, the WOT average was 27kt at 5650rpm using 19.2L/h. I didn't expect the MFS 60A to perform as well but it left the Yamaha in its wake.

Tohatsu has squashed the old adage, “there’s no replacement for displacement”, when it comes to mid-range four-stroke outboards. Its lightweight 60 will make re-powering easy as it has the grunt to suit a wide range of hulls.

It would even suit older Quinnies like the five metre Cruiseabout, as the old Johnson 70 mostly fitted to these hulls developed only 63bhp at the prop. And the 13kg lesser transom weight would make a significant difference to fore and aft trim. Similarly it should perform well on smaller ’glass hulls such as the Haines Hunter 445R.

But unlike the old Suzuki DT60C the MFS 60A won’t help you lose any flab. Oh well, no engine is perfect!