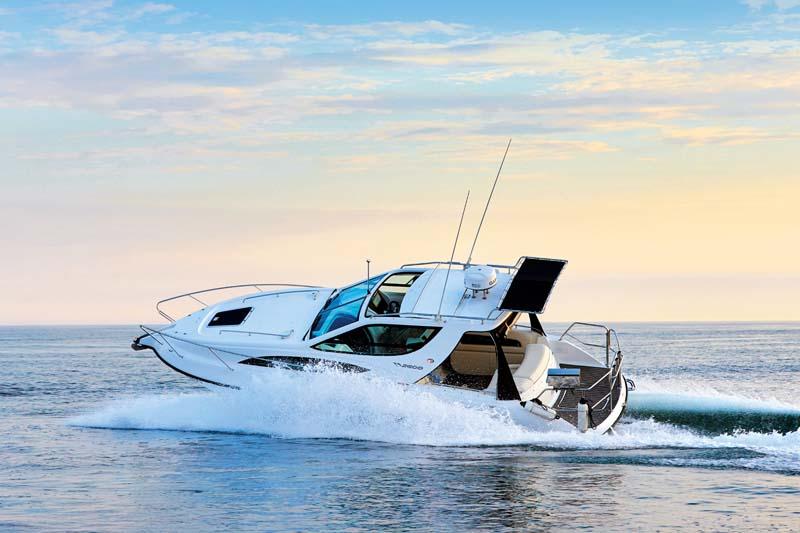 Whittley started building boats for its local market more than 60 years ago and quickly found favour around Australia and New Zealand due to its boats’ rough-weather capability and comfort. Boats rarely manage to combine both attributes, most ending up at one end of the spectrum, so Whittley’s ‘four-seasons capable’ mantra stands out. The concept is easily seen in the 2600 Cruiser’s deep-V straked hulls, intuitive Volvo Penta Glass Cockpit and comfy berths. It looks tough on the trailer but a peep inside tells you it’s there to keep you cosy and safe no matter the weather.

The Whittley 2600 Cruiser is the second-largest of the Whittley boats range, only outdone by the Whittley 2800. It’s tow-friendly at 2.5m wide on trailer but can tip up to a not inconsiderable 3500kg when loaded, so a large SUV is on the cards but towing restrictions, thankfully, are not. The model is aimed at the family cruising market, particularly those looking for true bluewater credentials and economy. It can comfortably house its maximum-rated eight on board and will easily sleep four. Power comes by way of Volvo’s D3 220hp turbo-diesel and it’s something special for a trailer boat.

The Whittley CR 2600 Cruiser’s layout is clever. The raised helm allows more space in the proper stand-up shower and head while the tall wheelhouse balances out the raised foredecks. This gives the boat a split-level arrangement with truly massive berth and galley areas, good helm visibility and spacious aft cockpit. A full length roof covers the cockpit and, with clears, offers full weather protection.

The galley has everything you need for trips away, with a safe-in-enclosed-cabins methylated spirit burner, sink, fridge and plenty of bench space. The central table is removable and also acts as a fill-in to create a double berth.

At the helm is one of the standout features – the Volvo Penta Glass Cockpit. Essentially a control hub for the boat and its engine, it doubles as switchgear for lighting and controls the thumping Fusion sound system. I believe this is the way forward as it frees up dash space, allowing for larger overall units. The intuitive nature of the controls is fantastic. The EVC throttle, Volvo-speak for Electronic Vessel Control, falls to hand nicely and with the adjustable wheel, space isn’t an issue.

Under the helm seating, a large freezer extends the time you can spend on board, while to starboard, under the passenger seat, is additional storage. Behind the helm seat is a neat drawer system for glasses and mixers when entertaining guests. It faces out, into the cockpit, and is a nice touch for the entertainer.

The cockpit comes standard with an infill for the transom step-through, creating a U-lounge big enough for the family or, when the table is manipulated into position, the area can act as a second berth or sun pad.

A rear platform finishes off the 2600’s liveable areas – and it’s one of the best. The size is massive for the boat’s overall length, offering a good space to set up for watersports or, when ordering the optional rails and rail-mounted BBQ, for social entertaining.

Access to the Volvo D3-220 is through the rear lounge and it’s neither difficult to enter nor cramped once inside, both important for safety. The Volvo’s main service points are easy to reach, with belts, pulleys and vital pumps on the front face of the engine – safe and easy to service.

Around the bow, the walkway is narrow. Roof-mounted grab rails help but access through the bow hatch would be the safe option in rough weather. At the bow a winch and additional storage for rope and chain are standard.

We had our test boat for two full days in picturesque Lakes Entrance in Victoria’s East Gippsland. For Trade-a-Boat it’s a testing paradise as the bar will challenge any hull and the open bluewater tests general seaworthiness, while inside the lake we can measure fuel burn and test speed safely.

At dawn on day one we were offshore, just outside the entrance, in a gentle rolling sea. The Whittley 2600 worked well in the one-metre swell, never ploughing or rolling off a wave. Running quarter on, the bow cut the water and the small amount of lift never forced the CR2600 to list coming up or heading off a wave. Once on song, the Volvo D3-220 held momentum well, as you’d expect from a Duoprop boat of the 2600’s weight. At rest, the low-slung weight of the Volvo and the pronounced chines worked well to make for a stable platform.

Day two gave us an opportunity to try an outgoing tide at the Lakes Entrance bar. Moving at a solid 10kt, the narrow entrance formed pressure waves standing at around 1 to 1.5m and concentrated the same distance apart. With the occasional undercurrent making holes, it was a good test.

Alan Whittley, company managing director and son of co-founder Neville Whittley, took the reins as we filmed from the hard. No-one knows the Whittley CR2600 as well as Alan – it’s one of his favourite holiday models – so he was never going to take it easy. I’ve seen plenty of exuberant driving and I’ve been called ‘the guy who can make the boat jump’ but I haven’t seen too many cruisers handle a bar as easily as Alan and the 2600 made it look. A few times we even saw the Duoprops catching the scattered sunshine.

It’s a different point of view from the shore and I watched intently to see how the boat landed and how it coped in a head-on collision with one of the bigger waves. The boat landed beautifully, typically on the rear third of the hull making the best of the 19-degree deadrise and low-down weight of the engine and stern drive. Whether a trough took Alan by surprise or a peak stood tall, the watery blockade had no chance – the Whittley 2600 pushed anything that came at it aside. The defined chines, which come forward and up at the bow, worked well as spray deflectors keeping the screen dry at all times. Even through troughs, the boat’s momentum never suffered and the bow rose easily to meet the next wave.

The Whittley CR2600 Cruiser feels at home in waters like East Gippsland and suits those looking for overnight capability in a truly trailer friendly boat. The balanced comfort and performance coupled with the Volvo Penta’s efficiency and ease of use is an appealing proposition. But the biggest benefit of the 2600 Cruiser is the opportunity of seeing both ends of the country in one boat. Trailering is a realistic option with a big SUV but with the liveable space on board, taking one from Tasmania to Groote Eylandt would be a dream come true for the whole family.