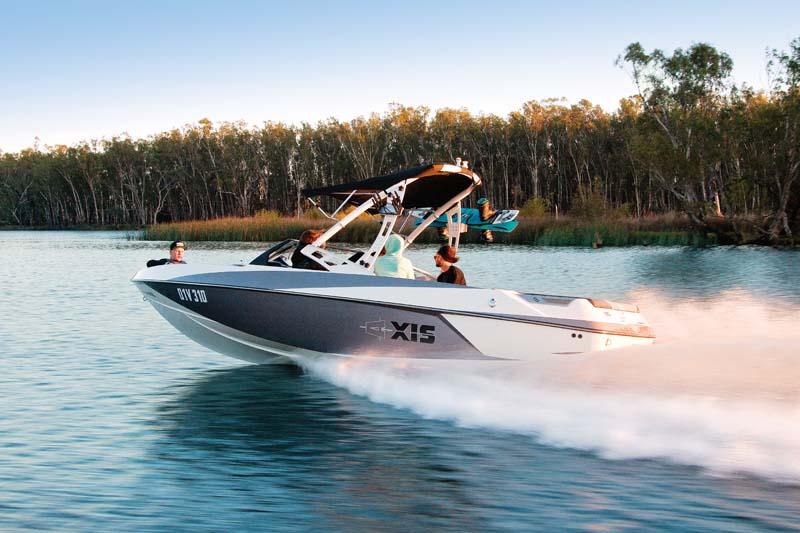 Malibu’s Axis Wake T22 wakeboat is clearly aimed at two types of buyer; the hardcore wakeboarder with a little less to spend, and the family of weekend riders who don’t need the shiny bits. Most importantly though, the T22 has allowed a new buyer to enter the market and see their money go further than ever.

Top-of-the-line wakeboard boats don’t come cheap. For what is usually a weekend if not seasonal activity, handing over six-figures of dosh is a big deal to most. And therein lies the passion you find in and around the wakeboarding community – but that’s a discussion for another time.

Until quite recently, it seemed there would forever be a gap in the new boat market that kept anyone without $100,000-plus to spend out of the high-performance game.

Around the mid-to-late 2000s, Malibu Boats took notice of the market’s shortcomings and created Axis Wake Research. Its goal: to produce a more affordable line of high-performance wake boats.

Around this time, high-end manufacturers had become seemingly obsessed with tech features and blingy options; neons, subwoofers, heated showers, tables and various other questionable shiny ad-ons. And as much as the average wakeboarder loves a good sound system, obviously the most important ingredient to a great day on the water is a boat that produces high quality wakes.

With its Malibu DNA, the entire industry was chomping at the bit when the first range of Axis wakeboats was announced, around mid 2009. And we weren’t disappointed. The first two boats off the line were the Axis A20 and the Axis A22 – 20 and 22ft (6.1 and 6.7m) respectively.

They looked the business with their utilitarian style, an on-trend square bow, and hull lines that looked familiar. The interior was simple and purposeful, like a race car.

But it was the test drive and ride that really surprised us. With ballast full and five or six occupants, the Axis A22 pumped out wakes as if it had been refining and perfecting its hull for years. It seemed that being a sibling of Malibu could get you places fast.

Axis, like Malibu, had become a great listener. So when wakeboarders and watersports enthusiasts expressed a desire for an Axis A22 with a ‘traditional’ bow setup, they answered with the Axis T22.

But they didn’t stop at the new bow design. There were even more advancements in hull design, updated styling, as well as the addition of two technologies that had already changed the market forever; the Malibu Power Wedge and SurfGate.

The anticipated traditional bow is nice and deep, meaning plenty of height to keep its couple of occupants safe and dry.

The interior seems more roomy than its predecessor, probably due to the new walk-thru leading to the bow.

The quality-feeling wrap-around lounge is typical rear-mount V-drive layout, with plenty of stowage for things and beers under the seats. Cupholders galore, board racks and speakers abound, and there’s plenty of non-slip stripping around the edges for safe passage in-and-out of the boat.

The cockpit is simple and to-the-point; steering wheel, throttle and analogue gauges being the main focus, while simple switches for bilge, ballast, lights and horn, among other accessories, sit neatly in two unassuming rows. The Axis T22 has a simple layout really sets the tone of the whole boat – essentials only.

This is where the Axis range really pleases – the all-important wakes. As with any top-of-the-line model, the Axis T22 is capable of producing wakes anywhere from unweighted gutters for beginners, right up to fully-loaded knee-high ramps that challenge even seasoned riders.

Often wakes can become crumbly and inconsistent when weight is varied, creating extra work for both the rider and the driver. But having some of the industry’s best hull designers on hand has left the Axis T22 with wakes that are smooth in transition, nicely spaced, and are a thing of beauty at any size.

Things are easy to operate for the driver too, ensuring anyone with some experience can hop in and drive a set. The boat handles well, while power comes on and off smoothly.

As mentioned earlier, the Axis range now offers Malibu’s Power Wedge and the now famous SurfGate. For those of you who don’t know, the Power Wedge is a large foil that hangs off the back of the boat, creating drag and displacing more water – in turn making a larger wake.

The other defining piece of hardware offered to the new Axis range, is Malibu’s SurfGate. Since the recent surge in popularity, demand for wakesurfing capabilities has become a new standard.

What is wakesurfing? When a boat is weighted and driven at a low speed, a wave is created a few metres off the stern. Imagine SurfGate as an actual gate, swung wide open and displacing water to enhance the size and shape of the wave.

Using a specifically designed board for this small, yet infinite wave, there are hours of fun to be had, even if the conditions are rubbish. A shortened rope is used to help beginners stay on the wave, while advanced wakesurfers surfers can delve into a wide world
of tricks.

Both of these accessories are designed to create drag, therefore fighting against the boat’s forward motion, so don’t forget to disengage when no one is riding!

As intended, the Axis Wake T22 wakeboat is clearly aimed at two types of buyer; the hardcore wakeboarder with a little less to spend, and the family of weekend riders who don’t need the shiny bits.

For the hardcore crew, it offers practicality, to-the-point features that can take a good flogging and, above all, the ability to pump out large, perfectly shaped wakes to ruin knees and allow any experienced rider to progress their riding.

For the family, or rather parents, this boat offers high-performance, while catering for a wide range of ability. It’s easy to operate, has loads or room for a large family, their gear and the friends, and no pointless bells and whistles for the kids to break!

Most importantly though, the Axis Wake has allowed a new buyer to enter the market, and see their money (and inevitably their ability behind the boat) go further while supporting a locally made product. The market is now seemingly complete.